[NEWS] 'THE VOICE' RECAP: A SONG OF NICE AND DIRE 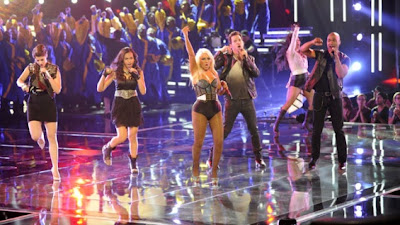 Week 1 of The Voice‘s Season 2 Quarterfinals closely paralleled a pivotal scene in Game of Thrones‘ inaugural season: What appeared to be a character central to the action had his head unceremoniously detached and placed on a spike as the crowd — or at least the three people in my living room — roared approval. The only thing missing was Christina Aguilera emerging naked from the funeral pyre of her Bionic album, its jewel case having hatched into a tiny, fire-breathing dragon.

And while, from a musical perspective, the episode was an unmitigated disappointment, we still have to get on with the business of discussing the evening’s eight solo performances — from the four members of Team Xtina and four from Team Blake. (The less said about the caterwauling group performances the better, no?) Each coach ended the episode by instantly eliminating one singer: On Tuesday’s results show, America’s votes will save one member of each judge’s team, and then Blake and Xtina will respectively send a second contestant to safety, while sentencing the third to the guillotine.


Best Performance: Ashley de la Rosa (Team Xtina) | I’ll admit I disagreed with Xtina’s decision to save Ashley last week, but all I can say now is the “Beautiful” singer has a better ear than me. Ashley’s rock-inflected cover of Jewel’s “Foolish Games” was deeply moving and thrillingly original — veering from a gentle whisper on the verses to a gut-busting glory note that matched anything we’ve seen on The Voice this season. By the time Ashley played with the melody and went into the stratosphere on her final refrain of “you were always crazy like that,” I was firing up iTunes to purchase her rendition of the song.

Most Disappointing Vocal: Lindsey Pavao (Team Xtina) | In theory, I understand why Xtina wanted to push Lindsey to use her voice “in a bigger way,” but in practice, you can’t ask Joni Mitchell to be Celine Dion, or Beck to be Josh Grobin. In other words, maybe Lindsey giving us a stripped-down acoustic Rihanna medley might’ve been more pleasing to the ear than her straight-up-the-middle “Part of Me,” which spun out in the intersection of strained and pitchy every time she went for a big, belt-y note. (Why Adam had to couch his critique by stammering he was stupid for pointing out pitch problems makes me wonder if he should think about sitting quietly with his hands folded in his lap after performances.) Even worse, Lindsey seemed to lose any sense of originality this week: “Part of Me” felt like a WWKPD? (what would Katy Perry do?) cover, right down to the tight white pants, flared bedazzled jacket, futuristic braid, and “human microphone.” Where’s that chick who two weeks ago rocked Gotye better than Glee or Idol or even Gotye himself on SNL?

“What the Hell?” Prize: Chris Mann (Team Xtina) | I wish I could just insert a photo collage of a washing machine, a giant floor fan, Chris Martin, and Ben Stiller in Zoolander to depict my feelings about Mr. Mann’s almost comical cover of “Viva la Vida.” Dude adds vibrato to his music the way Ina Garten adds butter to her recipes, and the layers and layers of vocal affectations overpower the meaning and the message of the music. I agreed with Adam’s not-quite-articulate critique — there was something simply odd about Chris’ performances — and I suspect that Xtina and her main man may be overestimating his chances to go all the way to the finale. Or Lord, I hope so anyway.

Most Overrated: Jesse Campbell (Team Xtina) | Cee Lo, Adam, and Blake heaped praise on Jesse’s performance — although Xtina slyly didn’t mention anything about the actual vocal — which made it a pleasant shock when his coach gave him the boot at episode’s end. Honestly, I’m not sure there was a single note in tune during the last two-thirds of Jesse’s cover of “Halo,” and to make matters worse, the dude’s attempts to make Beyoncé’s track his own steadily devolved into a bizarre stream of wild, screaming hysteria. By the time Jesse started hollering ad-libs like “People of the world! You’ve got a halo!” (no, sir, I do not) it all veered a little uncomfortably into “crazy guy shouting on the subway platform” territory. Yeah, two weeks ago Jesse was the guy touted by the coaches as having a huge shot at the Season 2 crown, but (bringing back our Game of Thrones comparison) Xtina made the right choice in sending this major character to the executioner.

Source: TV Line
Posted by AGUILERA ONLINE™ at 8:20 AM