[NEWS] 'THE VOICE' QUARTERFINALS: 12 THINGS YOU DIDN'T SEE ON TV

From Christina Aguilera's double dose of Britney Spears to why we should be thankful NBC doesn't use smell-o-vision, THR reveals what happens when the cameras aren't rolling. 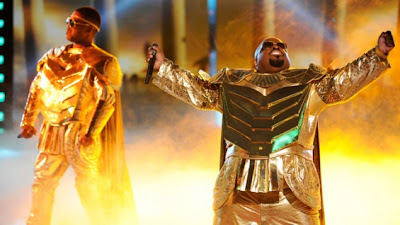 It was an evening of mad intensity on NBC’s The Voice on Monday: A coach passing gas, a performer’s song choice picked entirely to respond to another coach’s criticism and two performers went home in instant eliminations – and that’s just what you saw on-screen.

The Hollywood Reporter was at the live taping and witnessed the behind-the-scenes shenanigans that happen when the cameras aren’t rolling. Here are 12 things you didn’t see on television.

1. The pre-party. The coaches arrived in pretty jovial spirits to Monday’s tapings. Blake Shelton came in sipping from a red cup (and you know what that signifies, frat boys). When the warm-up person asked him what was inside, Shelton answered, “A big cup of shut the hell up.” Christina Aguilera danced up the aisle as she entered the studio and Adam Levine ran in giving high fives to the audience. As for Cee Lo Green, go to item No. 2.

2. One take wonders. While the other coaches took their seats, Green was on-stage. Call time was pushed to about 20 minutes earlier, so that the funk singer and his Atlanta hip hop group, Goodie Mob, could pre-tape their performance of their new single, “Fight To Win.” The group only needed to perform the song once.

3. He put us in our place. About a quarter of the way into the show, the audience did seem to lose some of its energy. And the warm-up guy wasn’t happy about that. He reminded us that when one person stands up, everyone stands up with the same rule for clapping. And then, he proceeded to point out the areas of the audience that were guilty of breaking the rules.

4. TMI, Cee Lo. It’s now widely known that Green had passed gas while the cameras were rolling. What the TV audience was spared from was the coach’s reasoning. “I’m feeling nervous,” he said. And then the warm-up guy asked him what he had for lunch. “An egg white omelette,” he answered. Let’s collectively thank NBC that it hasn’t added smell-o-vision to The Voice experience.

5. Cool, calm and collected. Executive producer Mark Burnett was spotted in a redVoice t-shirt while chatting happily with the coaches during breaks. That’s a stark contrast to last season when he arrived wearing suits and was known to look pretty stressed during the breaks. What a difference a hit season makes.

6. Color blindness. During Team Cee Lo’s performance of “Dancing In The Streets,” we saw the coach, Cheesa and Juliet Simms bathed in blue light. The warm-up guy told us it would look totally different on TV, which it did. What we all saw as blue light in the studio, you saw as black and white.

7. Christina will take a Britney Spears double. During one of the breaks, the warm-up guy asked Aguilera whom she was compared to when she first started her music career. Of course, this was the “Genie In A Bottle” era for the singer and before most people realized the range of her voice talent. At the time, Spears was the reigning pop princess and that's what the whispering audience thought she'd say. Aguilera, though, refused to answer the question. Then, her former Mickey Mouse Club cast mate, Tony Lucca, took the stage and sang Spears’ breakout hit, “Baby One More Time,” as a response to her controversial comments about him. That must have really stung.

9. What’s the cup holder for? On Monday, only Aguilera used the cup holder on the left arm of her coaches' chair for an actual cup. Shelton keeps his mobile phone there and handy for tweeting during the show. Green keeps his battery-operated fan there to cool himself off (though after passing gas on the show, it may have another use). And Levine was the only one who kept it empty – he held his mobile phone in his front pocket.

10. Adam just wanted to play drums. It was pretty unique of Levine to refrain from singing during his team’s performance of “Instant Karma.” Lucca told THR after the show that the producers pleaded with the coach to sing something during the performance, but he refused. He was more excited about the chance to play the fairly difficult drums on that song.

11. Adam’s drumsticks make good souvenirs. After playing the drums during his team’s performance, the warm-up guy split the pair and gave them to two lucky audience members.

12. Songs are Cee Lo’s domain. Several members of Team Cee Lo told THR that their coach picks all their songs. And while Green may hear them out when they don’t believe it’s the right choice, the man is very persuasive and usually gets his way.

Source: Hollywood Reporter
Posted by AGUILERA ONLINE™ at 8:22 AM