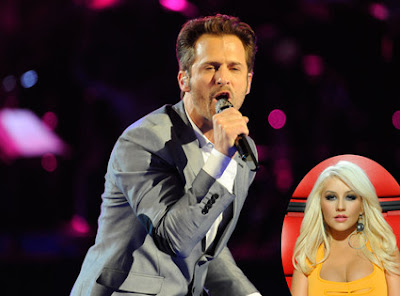 Cee Lo Green and Adam Levine’s teams threw a pretty rock and roll heavy live show on NBC's The Voice on Monday. The Hollywood Reporter was there feeling the heat -- both literally and figuratively -- all to bring you the behind-the-scenes details that the home audience didn’t get to see.

6. Christina makes time for a little fan. The warm-up guy set up a quick dance contest over a commercial break. He asked one bubbly eight-year-old girl who her favorite coach is and she answered Christina. So, that earned her a big hug from the pop star -- a pretty good consolation gift for placing second in the contest later.

9. Dissension in the ranks? Christina was pretty hard on her former co-Mouseketeer Tony Lucca after his performance calling it "one-dimensional" and wondering if the support of their former Mickey Mouse Club stars -- specifically one very supportive Justin Timberlake -- would make the show a popularity contest. And perhaps, there was much more to say about it than what was said during the televised critiques. During the next commercial break, Blake, Cee Lo and Adam had a spirited huddle.

To see the other 10 things you didn't see on TV, click the source.
Source: THR
Posted by AGUILERA ONLINE™ at 12:29 AM