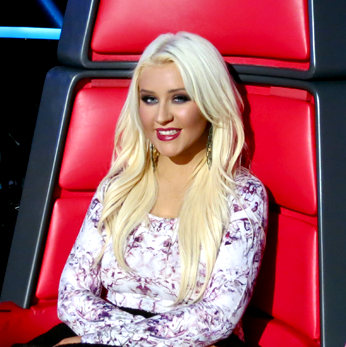 Often times, many of the most interesting things on reality shows occur when the cameras are off.

If at first you don't succeed: Producers weren't happy with Florence + The Machine's first take of their song "No Light, No Light" so they made them perform the tune twice. There were absolutely no complaints from anyone in the audience as they were thrilled with more Florence, even if it was the same song.

Mingling with the fans: It pretty rare that the judges leave their seats at any time during the show because commercial breaks are over before you know it. So that's why it was such a pleasant surprise that Christina Aguilera left her post to talk to fans and sign autographs during a break. Also, in the event you were wondering, she did the whole thing barefoot.

Dirty dancing: Before the show began, Bill (the warm up guy) plucked a number of men for the audience and asked them to dance for free "The Voice" t-shirts. Everything worked out fine until one of the contestants decided he was going to do his best impersonation of an exotic dancer instead. Needless to say, he didn't win any item of apparel.
Source: Zap2it
Posted by AGUILERA ONLINE™ at 10:08 PM