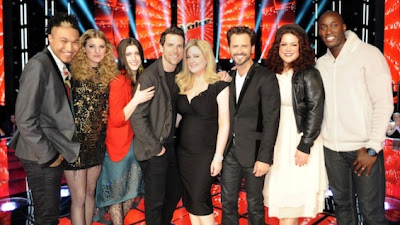 After surviving blind auditions, several heart-wrenching eliminations and overcoming their nerves while winning America over, NBC’s The Voice is now down to its top eight performers. And The Hollywood Reporter has the first look at the season two semifinalists' class photo.

Aren't they an attractive and talented bunch?

Next Monday, the semifinalists will perform once again for America’s votes and only four of them will move on to the finale episode on May 8 at 9 p.m. on NBC.

Source: Hollywood Reporter
Posted by AGUILERA ONLINE™ at 8:19 AM