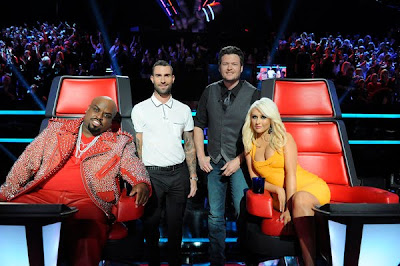 Something is in the air on The Voice. The initial live episodes last week saw coaches Christina Aguilera and Blake Shelton locked in amiable competition, like old Southern gentlemen having a polite disagreement. This week, however, it's Team Adam against Team Cee Lo, and these two bros seem headed for a 12-pace musket duel. The fighting words aren't just between those two, either. Xtina is more antagonistic than ever, and all the judges dole out more harsh truths to the contestants than ever before.

Let's look at Team Adam first. Leading the pack is Katrina Parker, who forces an Adele comparison when she sings, even wearing her hair like the superstar for this performance. It's a soaring, anthemic version of Smashing Pumpkins' "Tonight, Tonight," which reconfigures the DNA of the original song and feeds it Incredible Hulk serum. In response, Xtina lodges the night's first nonsense complaint: "I wanted you to rock out a bit more, and your dress restricted that." I don't understand women nearly well enough to decode what that means, but it doesn't sound good. Cee Lo says Katrina performed it in too theatrical a way that lacked the tortured vocal gravitas of alien-person Billy Corgan. Adam defends Katrina, though, insisting she made it bigger than a rock song.

Xtina's former Mouseketeer buddy Tony Lucca turned four chairs with his heartfelt blind audition performance, and with his obvious talent and can't-miss back story, he seemed poised to go far. Could that have only been a couple of months ago? Tonight, it seems impossibly far away. Adam looks put off during rehearsals when Tony sings Peter Gabriel's "In Your Eyes." Then we see why: his actual performance is rather unremarkable, aside from the giant floating pupils in the background that make for way too literal (and creepy!) an interpretation. "I just find you very one-dimensional," Xtina tells Tony afterward, dismissing anything else he's done up to this point. "That was honest!" Adam says, before telling the dejected singer how proud he made him.

You can't make a record like Adele's 21 and not have it haunt reality singing competition shows for eternity afterward. Tonight, it's power vocalist Kim Yarbrough's turn to roll in the deep. Kim has a truly rich voice, and though the song couldn't be more obvious, she looks appropriately scorned while singing it. "This is such a safe song, such a current song," Cee Lo says. He thinks Adam should have discouraged the choice. Adam praises the performance, but does acknowledge that not everybody can do what Adele can do. "Adele's a freak," he says.

When Mathai sings John Legend's "Ordinary People," wearing a thin gold headband that also bisects her head across the top, Adam rocks out with his eyes closed, like Ray Charles. Mathai's got a bit of a Billie Holiday thing going on with her voice, and she's certainly beautiful, but it remains unclear exactly what Adam was hearing that I wasn't. "It was a little lounge-y," Xtina says, with sharpshooter accuracy.

The last time we saw Karla Davis, we also met Bertha, which is the nickname Alanis Morissette bequeathed the big-girl voice that lives inside of her. We do not meet Bertha again tonight. You have to give it up for the sheer chutzpah of choosing a half-rapped song like B.o.B's "Airplanes" for such a high-stakes performance, and she gives it an admirable shot. We know that there's more (and better!) to her voice, however, and the surprise element isn't enough. "I was definitely surprised!" Xtina says, setting Karla up for an insult that doesn't come. Meanwhile, Adam says, in the nicest way possible, that she did way better back in the studio.

Pip does a dead-on Brandon Flowers impersonation, bringing intensity to the Killers' "When You Were Young." When the camera cuts to his parents in the audience, they're wearing his signature bowties, too. They probably cried into those ties when they heard what happened next, though. "I appreciated your vocal ability, but it wasn't connecting for me," Xtina says. "It seemed like you were trying too hard." Adam praises the usually Broadway-style Pip's willingness to surprise, but he admits it didn't go as well as planned. "I didn't want to trust you as much as I did," he says. Pip stares aghast as Adam basically tells him to be less trustworthy. Does he want to hear a dog with shifty eyes singing?

Over on Team Cee Lo, tonight the self-described freak wants to encourage his artists' "individual individuality." Up first is Cheesa, singing "Don't Leave Me This Way" by Thelma Houston. Too bad she's wearing a purple power suit and yellow top, like the Joker. There's a more mature quality to her voice than usual, though. Adam says Cheesa has a great voice, but so do a lot of singers. Oddly, when Cee Lo tries to defend her against this accusation, he only defends the Seventies: "Disco is an era where you can have a fusion of that power lead vocal and excitement and energy." That doesn't bode well.

Who knows exactly what James Massone did to deserve getting saddled with Norah Jones' "Don't Know Why"? Did he steal Cee Lo's girl? Is that what he did? Cee Lo claims he picked the song because it's so sweet, and he noticed on Twitter how the ladies were feeling James. They continue to feel him, too, creating a Beatles-on-Ed-Sullivan-level cacophony when he comes over to the crowd and sings directly to them. To James' credit, he looks comfortable and sounds great on the verses. The high notes are rather painful, though. Straight-up. "I wanted to throw my panties on the stage," Blake Shelton says, making it weird, but Ladies Love Cool James, and so do the judges.

Juliet Simms has been one to watch since the Janice Joplin-like singer killed it at the audition. Here, she sics her throaty classic rock wail on the Police's "Roxanne," admirably willing some extra syllables into the phrase "red light." Cee Lo stands up afterward and jiggles his pockets, which I think means he liked it? "Well, this just pisses me right off," Adam says, alluding to how he tried to get Juliet on his team. He calls it the best performance he's seen so far, and all the judges seem to agree.

Tony Vincent was trained on Broadway, and he is fittingly given a Broadway set tonight, singing much of Tears For Fears' "Everybody Wants to Rule the World" from atop a giant evil podium, like some nightmare politician. It sounds like he's holiding himself back, but he still can't help putting Broadway inflection on everything, flinging his arms around like a praying mantis. Cee Lo apologizes for anything he may have done to suggest Tony restrict himself, but he leavens this comment by saying, "If you support team Cee Lo, then vote for Tony." When your coach is apologizing to you, that is never a good thing, though.

In turns of production values, Erin Martin has got Tony Vincent beat. First she appears in the studio with her hair in a cotton candy up-do, like the Bride of Frankenstein in a wind tunnel. Then she comes out to sing the Bangles' "Walk Like an Egyptian" in a golden chariot carried by shirtless men. "Again with the male srippers," Blake says. "Blake just bought a one-way ticket to Bonertown," Adam retorts. I'd like to unpack that statement and get to the root of the issue, but I don't even know anymore. What's clear is that nobody was entirely won over by Erin's performance, despite its tight choreography and hand gestures. "I want you to be more aggressive," Cee Lo says. "I want your attitude to be more take-charge and win this thing."

Speaking of winning this thing, the final performance of the night seems like the kind that might just do it. (What is it about going last?) Jamar Rogers does an impassioned take on "Are You Gonna Go My Way" that even the hippie guitarists on stilts in the background can't detract from. It's an energetic performance and the crowd goes nuts, earning Jamar a rare standing O from the judges. Blake complains about the stilts, but it's clear that he approved of the performance. They all do. "This moment proves you embody what the show is," Adam says. After hearing what he said to Pip, that must mean he doesn't trust Jamar at all.

Tonight: Four more contestants will be sent off to their destiny, but who will it be?

Source: RollingStone
Posted by AGUILERA ONLINE™ at 9:48 AM