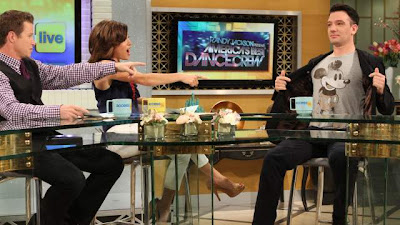 “I love her. She’s absolutely supposed to do her job and express her opinion, and that is definitely her opinion,” the former *NSYNC-er told Billy Bush and Kit Hoover on Wednesday’s Access Hollywood Live, when asked if Christina “broke the code” by being harsh on a former co-star. “I think Tony has represented himself magnificently on the show because I don’t really just look at Tony as a singer, and [Christina] is thinking in terms of maybe singing, how he sang the song.

“I’m looking at him as a performer,” he continued. “And I know the show is called, ‘The Voice,’ but I’m looking for the best performance and I think that he represented himself magnificently on the show so far.”

Like Christina, JC is also flexing his reality TV muscles as a judge on “Randy Jackson Presents: America’s Best Dance Crew,” and the 35-year-old star was quick to deliver a verdict on which of *NSYNC’s five members had the best moves.

“I think Justin [Timberlake] and I were probably the best two dancers,” he told Billy and Kit. “The fun part about me was I was also acrobatic, so I could do backflips across the stage and things like that – that was one of kind of my things that I brought to the table.”

Source: Access Hollywood (Live)
Posted by AGUILERA ONLINE™ at 9:16 AM