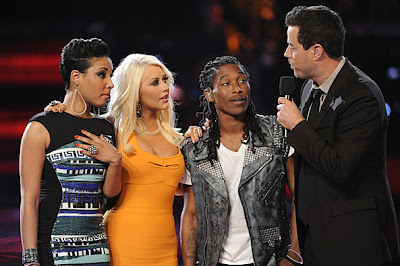 On-screen, The Voice spends a lot of time focusing on coach Christina Aguilera needling fellow coach Adam Levine, but off-screen she seems to be much more serious. The coach with the diva voice has proven she's so much more by picking the most diverse team for this second season, including the first-ever MC on the show. Clearly she likes to challenge herself, but when LA TV Insider Examiner caught up with her after the first "Live Elimination" round of The Voice in Los Angeles, Aguilera admitted that choosing such a wide range of team members-- and then deciding which one to "save" tonight-- didn't actually have anything to do with the trends in the music industry or the desire to "win."

"I can't go by what other people think. You know, I see the potential in these people from day one, when I hit that button, and I have no idea what is behind me that I'm turning around to. I really am instinctual in the process of how I do things," Aguilera shared.

But more than that, as time has gone on on the show, Aguilera has spent hours upon hours working with her team on everything from song choice to arrangement to stage presence and the larger-than-life "concert style" performances. All of those things add up in her head as a mental checklist of what each person has to offer as the show goes on. And not just what they can offer Aguilera or the team but America as artists.


"I really get to know my team. That's why it's so much harder to see people go: because we really do form a bond. I like to get in their heads, see what makes them tick, see what they're passionate about, all of those things," Aguilera continued.

Moses Stone, a Team Christina member who was eliminated tonight, admitted he would happily email Aguilera for notes or with questions on songs as he works on his own full album because of just how "hands on" she is. But Chris Mann, who has advanced to the next round of the show took it one step further:


"Christina's working on an album right now, so you never know-- any time I could get a chance to sing with her, I'd love that!" He smiled.

Aguilera may be extra busy these days, in the studio for her team as well as for herself, but clearly she's a strong multi-tasker. She even takes the time to continue to work with those who may no longer be on The Voice but will always be a part of The Voice family.

Who knows? One day soon Aguilera might find her tracks listed side-by-side with those of some of her proteges on iTunes!