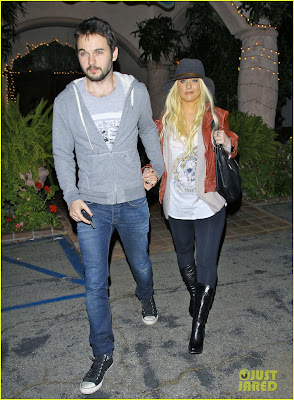 When Christina Aguilera, 31, started dating Burlesque set assistant Matthew Rutler in late 2010, "we thought it was going to be a quick, seat-of-your-pants romance," a Rutler source admits to Us Weekly.

But more than a year later, "it's turned into something special," the source shares. Credit that staying power to Rutler's eagerness to please his girlfriend of over a year--especially when it comes to the Voice coach's son, Max, 4. (Aguilera split from Max's dad, her ex-husband Jordan Bratman, in 2010).

"He recently surprised them by taking them to Cirque du Soleil's Iris show," a pal says of Rutler. "They had a blast."

"There were about fifty people there," a partygoer tells Us. "It was intimate, and low-key. Matt and Christina were super affectionate."

Aguilera--whose figure has come under scrutiny ever since she first stepped into the spotlight in 1999--has, in recent years, been criticized for her curvier appearance. But none of that matters to Rutler: "Matt is happy with the way she looks, however it is," the insider shares. "Even when she was looking heavier, he would always say, 'She looks gorgeous to me.'"

Earlier this year, the Grammy winner opened up to Marie Claire about the positive effect Rutler has on her self-esteem.

Source: USWeekly
Posted by AGUILERA ONLINE™ at 1:08 AM