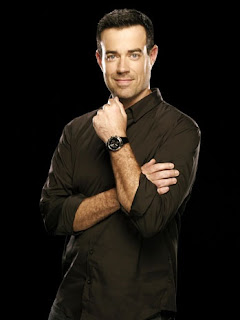 On Monday, Lucca performed a rocking version of Britney Spears' “Baby One More Time,” a move that Daly -- who is also a producer on The Voice -- called “ballsy.”

“From where I’m sitting and I know Tony well, Peter Gabriel didn’t quite work out for him,” he added. “I think he needed to come back last night with a home run or he faced instant elimination so it was really, really gutsy to do that Britney Spears cover.”

He added that when they watched Lucca perform the song in rehearsal, he thought, “this is either gonna kill or this is gonna bomb and Christina’s going to rip him the new one.”

Lucca’s performance on Monday was a major hit, and he was saved by America on Tuesday. “It paid off,” Daly said. “It’s the music business. It was a gamble and it worked.”

Speaking of Aguilera, the coach has had a noticeable make-under lately, showing off a more classy and polished look. Daly told reporters that while he thought “she looked fine before,” he has definitely noticed the change as well.

“She looks great,” he said. “You see it in her coaching. We all know, when you feel better about yourself, we all do better at your jobs. When she enters now, she’s got a little strut.”

Spears, Aguilera’s other former Mickey Mouse Club mouseketeer, may be on her way to another judges’ chair. As The Hollywood Reporter first reported, Spears is circling a chair on The X Factor. Daly said he would definitely be tuning in to see Spears on the Fox show.

“I’m as interested as anybody else,” he said. “I feel like I haven’t seen her communicate in mass media. Even for my radio show, to help her promote her records and get her for interviews, there’s been the conservatorship and things that have made that hard.”

Daly added that he’s known the pop princess “forever” and that he thinks highly of her. “I’m rooting for her,” he said.

Source: Hollywood Reporter
Posted by AGUILERA ONLINE™ at 8:37 AM