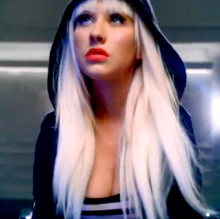 This is the first rumor in regards to the new material that is backed by someone who has established credibility.

A couple years ago, on the eve of the 2010 MTV Movie Awards, the source accurately revealed the setlist for the medley that Christina performed the following day (Bionic, Not Myself Tonight, and Woohoo).

Evidently, Christina's new single will be released in two-three weeks and will be promoted with a live performance on 'The Voice.' Furthermore, a summer release for the album is still the plan for now.

With all rumors, let's take this into consideration with a grain of salt since anything could change. However, it is beyond exciting!
Posted by AGUILERA ONLINE™ at 2:10 AM