[NEWS] WHY 'THE VOICE' IS HITTING THE HIGH NOTES 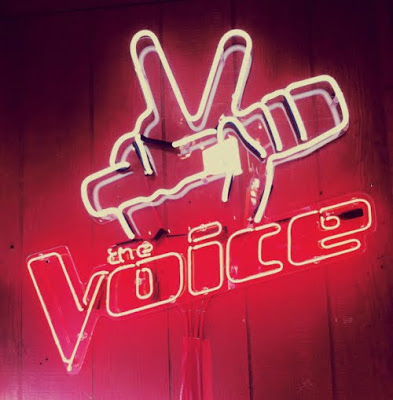 The Voice is suddenly on a hot streak - the kind of streak reserved for lightning-in-a-bottle pop-cultural phenoms that elevate hope and talent over hype and humiliation. The kind of streak that suddenly threatens to cast American Idol in the shade.

How is The Voice better than American Idol? Let me count the ways.

. The Voice has coaches, not judges. Christina Aguilera, Cee Lo Green, Maroon 5 frontman Adam Levine, and country vocalist Blake Shelton have a vested interest in the success of their 12 chosen team members.

. The Voice is tailored to the individual performer's chosen field of singing. American Idol forces contestants into a box. This week, disco, next week, power ballads, the week after that, duets with Pauly Shore. The Voice simply asks: Do you have a good voice? Good. Now show us how good. And do it your way.

. The Voice's coaches are singers themselves. They're working in the industry now, and their music is contemporary, relevant and on the song charts. Shelton is on tour now, with his finalist from The Voice last season, Dia Frampton.

. The Voice is inclusive. Last season, two of the four finalists were openly gay, and no one cared. American Idol appears uncomfortable with the subject, at least during the competition phase. (One theory holds that, because Idol's core fan base lies in the conservative, U.S. red states, alternative lifestyles are deliberately downplayed on the show.)

. The Voice makes no secret of the fact that many of its contestants have previous experience in the recording industry. In some cases, they've had record deals, only to be dropped by their label over time. American Idol, on the other hand, likes to pretend its contestants fell off the back of a turnip truck, even though some of them have experience, too.

. The coaches are expected to be themselves, not play TV versions of themselves. Levine is high-energy, uptempo, combative, sarcastic and outspoken. He's all about the music, not the fame. As he told me last month, "I trust this show more than I trust the business," when it comes to finding new talent. Green is soft-spoken and watchful; he listens more than he talks. Aguilera is effusive and open-hearted, but also given to moments of reflection and introspection. And Shelton, who some Voice insiders have tabbed as the standout coach, is as much about nurturing and encouragement as he is about album sales and tour dates. TV-reality competitions are not quite the same as real-world talent contests. They're designed for TV, for one; the talent part is secondary. They have to deal with issues of pacing, suspense, empathy and old-fashioned storytelling. They work best - as TV shows - when there's an element of challenge and overcoming the odds, and self-affirmation. There has to be a rooting interest, and a reason to watch other than mild curiosity about who will win in the end. There has to be a reason for viewers to come back, week after week. And when talent alone won't do it - some Idol seasons are stronger than others - there's always engineered drama.

The Voice has its share of contrived drama. Every second contestant, it seems, is an HIV-positive recovering addict or a 50-something lifelong music devotee looking for that one last shot at fame and stardom.

On Idol, though - especially this season - the contrived drama has overwhelmed the singing, at times.

There was no need, for example, to shamelessly keep replaying the moment when a 16-year-old fell off the stage during Idol's Hollywood audition phase. Contestant Symone Black, already suffering from dehydration, took a tumble off the front edge of the stage after performing a credible rendition of Otis Redding's Sitting on the Dock of the Bay. There was no need to show the accident what seemed like 67 times - no need, that is, except ratings and the fact that, thanks to the magic of video editing in the digital age, the moment could be packaged and used as a teaser for nearly two hours, followed by an episode-ending cliffhanger. Was she hurt? Did she injure her back? Will she ever sing again? Tune in tomorrow to find out.

Idol has now reached the audience knockout phase. A dozen contestants remain, following last week's systematic mauling of Adele songs. Idol will dial back on the engineered drama, in theory, from here on in and let the singers take over.

There's an inescapable feeling, though, that this year's field is weaker than in some past seasons, despite the judges' constant crowing about how this is "the best group ever!" It didn't help Idol's cause that Interscope Geffen A&M chairman Jimmy Iovine told one contestant last week that his "shtick" was getting old and that the show is called American Idol, not American Comedian.

Iovine remarked that another contestant was screechy and annoying, and said of one performance - which got a standing ovation from judges Randy Jackson, Steven Tyler and Jennifer Lopez - that it was cheesy.

Meanwhile, The Voice has wrapped its sensational blind-audition phase - the search for the mystery voice - and is now in the so-called "battle rounds," where the coaches assign a pair of singers in their teams to perform a duet, and choose the singer most likely to advance. The singers will be helped in their task by guest mentors: Lionel Richie and Jewel with Aguilera's group, Kelly Clarkson and Miranda Lambert with Shelton's group, Ne-Yo and Babyface Edmonds with Green's group and, perhaps most intriguing, Alanis Morissette and Robin Thicke with Levine's group.

Levine told Anderson Cooper recently that he's angling to get Kanye West involved with his group. Not so long ago, the very suggestion would have been laughable. Now, not so much. The Voice is suddenly serious business.

And music to the ears. The Voice has risen lately in the ratings, where American Idol has dropped.

The Voice is simply the better show, pure and simple.

The Voice is more relevant, more meaningful, more compelling and more entertaining right now, because it's good to listen to, not just fun to watch.