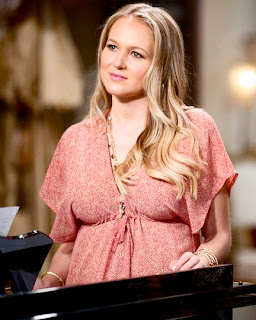 'The Voice': Jewel Says Christina Aguilera Reminds Her to 'Show What You Can Do'

The NBC competition's guest mentor tells THR what she has learned from working with the pop singing coach.

At first, it may have seemed strange to some viewers that Christina Aguilera picked pop folk singer, Jewel, to guest mentor her team on NBC’s The Voice. But, Jewel says she feels they come from similar stock.

“We grew up listening to a lot of the same vocalists,” Jewel tells The Hollywood Reporter. “I was educated by Ella Fitzgerald and Sarah Vaughn and Etta James and so was she. Though, I loved Cole Porterand the people that were writing the songs and eventually folk music and it led me down that path.”While the two singers met years ago at a Bill ClintonWhite House event, Jewel says they weren’t really friends until they worked with each other on The Voice. And while she was a fan of Aguilera’s singing before, she seems to have developed a newfound respect for the pop singer.

“It's been great. She really is dedicated,” the singer says. “She really is giving a lot of her time and energy and thought and care into helping these contestants, it's really a commitment. And I was curious how much these coaches put into it, because they all have careers and tours and she really takes it very seriously.”

Jewel recently spoke to THR about taking part in the series, what she has learned from Aguilera and what she thinks of the team the pop star assembled.

Jewel: I think we intercept, I think we're good for each other in a way. I don't know what she would think, but I have a much more technically skilled voice than I ever put on records, because I was taught all my life not to bring attention to myself but to bring attention to the song and the emotions. But because of that, a lot of people are surprised when they see me sing live, saying, "You're a much better singer than I thought." I think Christina is so skilled, she's like a Ferrari. When she was younger, which happens with a lot of vocalists, it's not always about the emotion, the feeling. I think we're a good pair that way. She reminds me to show what you can do a little more and hopefully still bring some heart. You can do both, you should do both if you can.

Team Aguilera’s Opera singer Chris Mann told reporters that he took offense at your suggestion that classically trained singers often forget about emotion. What do you have to say about that?

Jewel: I don't know what I said to the opera singer. I also do classical music, as well. I studied opera in school, which I probably didn't even tell him.

What do you think of the team she assembled?

Jewel: I like that she diversified a lot this year. She had some power singers on there, but she also went up for some folkies and some cool alternative acts. I thought the songs she picked for them were interesting. I loved that she did a Nirvana song for [Lindsey Pavao] and the folksy guy [Lee Koch]. She's really thinking of trying to put cool songs that will showcase them. And she likes real talent. She likes musicians. Because she doesn’t play an instrument herself, she likes people that do and she appreciates that talent.

What’s next for you?

Jewel: I have an album I just put out called The Merry Goes Round that I wrote for my son, released it independently. I'm about to put out a children's book in the fall by Simon and Schuster called That's what I do. It's based on a song I wrote for him by the same name and there'll be a free CD in it of the song along with the book and it's really beautifully illustrated I can't wait for people to see it.

Source: The Hollywood Reporter
Posted by AGUILERA ONLINE™ at 10:21 PM