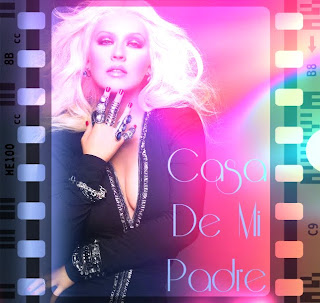 Will Ferrell is helping Christina Aguilera get back to her roots. "The Voice" judge has returned to Spanish-language singing with "Casa de Mi Padre," the lead track on the soundtrack to the comedian's telenovela-influenced comedy of the same name.

The new song finds Aguilera making a welcome return to Latin music. No synthesizers or AutoTune here -- instead, the production has dramatic Spanish guitars, blaring trumpets, and a gospel backing all with a flamenco twist. Aguilera's vocals are in the forefont, doing what she does best: belting and sustaining the notes most can only dream of nailing.

In a treat for Latin fans, "Casa" marks a return to the half-Ecuadorian Aguilera's early days. Aguilera most notably released a Spanish version her debut album titled "Mi Reflejo," in 2000. The album featured Spanish version of her No. 1 singles "Genie In A Bottle," "What A Girl Wants," "Come On Over, Baby (All I Want Is You)" as well as original tracks. She went on to win Best Female Pop Vocal Album at the 2001 Latin Grammy Awards.

Aguilera had only dipped into the genre since with a Spanish version of "Stripped" track "Get Mine, Get Yours" titled "Dame Lo Que Yo Te Doy"in 2002 and a contribution to the 2004 "Dirty Dancing: Havana Nights" soundtrack with "El Beso Del Final." The closest thing fans have heard since is the Spanglish banger "Desnudate," featured on 2010's "Bionic."

The "Casa de Mi Padre" soundtrack was digitally released on Tuesday, with the film due in theaters on Friday, March 17. The song opens the film.

Source: Billboard
Posted by AGUILERA ONLINE™ at 11:05 AM