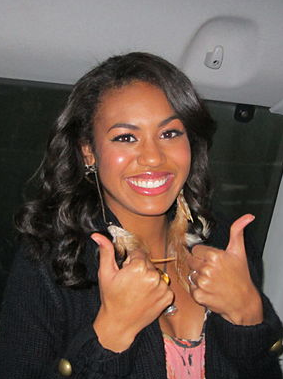 The Voice contestant Ashley De La Rosa has said that she couldn't have asked for a better coach than Christina Aguilera.

The high school student became a member of Team Christina on Monday night (February 20) following her blind audition performance of 'Shark in the Water'.

"So far the experience has been incredible. My school and my friends have been really supportive. It's kind of strange with the newfound fans and all of that, but I'm very appreciative and grateful for all of this."

"It's been an incredible experience and to be able to work with someone as amazing as Christina Aguilera, I couldn't have asked for anyone better."

De La Rosa said that she was nervous before auditioning, not only because of the celebrity coaches but also because of the level of talent all around her.

"They are amazing singers and performers so it's a humbling experience and I'm grateful for it," she said. "I would definitely say the nerves almost got the best of me and then singing in front of four incredible performers - singing to their backs and waiting for them to turn around was pretty nerve-wracking!"

As for whether she still hopes to pursue a career in international relations, De La Rosa said: "I have always had a passion for that and travelling, but that's what I'm trying to figure out with The Voice.

"It's giving me this opportunity at the moment so I'll take it and run with it as far as I can. If I don't make it all the way then I will definitely go back to international relations, but I always give 110% to the thing I'm doing and I don't want to spread myself too thin or look back and regret not giving my all on the show."