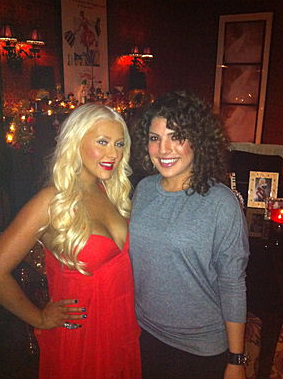 This week on The Voice, Monique Benabou was selected by coach Christina Aguilera after performing her version of the Kelly Clarkson hit “Mr. Know It All”.

Although Monique only managed to get the attention of Christina Aguilera during her Blind Audtion on The Voice, the Alameda, California resident was happy to be selected for Team Christina. Interestingly, it was Blake Shelton who first recognized the vocal potential of Monique Benabou and urged Aguilera to turn her chair.

So, with her position solidified on The Voice, how does Monique feel that Christina can take her to new heights as a singer?

When The Deadbolt spoke with Monique this week, Benabou shared her thoughts on being in The Voice competition under Christina’s wing.

“Christina, musically, she can open up a lot of different avenues for me. She’s worked with some of the best songwriters and producers over her career and really mixed different genres. I identify that kind of nomadic style but still staying true to a very soulful, powerhouse kind of voice.”

In relation to finding a common musical bond with Christina, Monique was quick to point out the similarities between what she brings as new singer on The Voice and what her coach has to offer.
For Monique, working with Christina Aguilera is all about a certain creative freedom on Team Xtina.

“I think we have that in common as far as the types of voices we have and the fact that we do like to play and experiment with the genres and styles of the records we produce.”

Source: The Dead Bolt
Posted by AGUILERA ONLINE™ at 2:19 PM