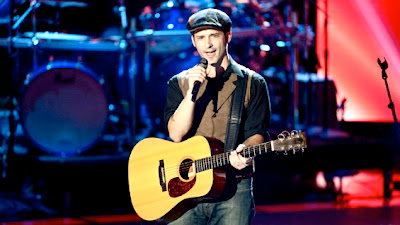 The Voice ended its second season premiere episode on Sunday with a performer it had to know would get some traction among the media and the show’s fans. Tony Lucca had starred on Disney Channel’s The Mickey Mouse Club in the early-90s along with coach Christina Aguilera. And, he had a lot of time to worry about how the reunion would all play out.

“The reunion was bizarre in a lot of ways,” Tony tells reporters during a press call on Monday. “Obviously, the producers and I agreed that was an interesting piece of the story, so we covered a lot of ground in that leading up to the audition. I certainly pulled my hair… What would be the best approach?”

The married father of one son admits he was always gunning for Adam Levine as his coach, but fretted whether Christina would feel snubbed when he went with the Maroon 5 frontman. Or if he did join his old cast mate’s team, would it be strange or inappropriate down the line when she had to pick between him and another performer?

“The fact that it didn't dawn on her who I was until after the blind audition certainly made that a little easier,” the 35-year-old singer-songwriter says. The cameras captured Christina’s jaw drop as her chair turned away from the stage and she recognized Tony. She then got up quickly to find him backstage.

“The way she came in and went down memory lane that was extremely flattering, to say the least,” he says. “It was really cool, because it certainly wasn't solicited or prodded out of her. Her sentiments were very genuine and honest and it was legitimately cool to reconnect. Everything's going to be a little bizarre in front of a camera, but I couldn't have been happier with the way it went down and I'm just really grateful for her to have been so gracious and flattering.”

There’s a four-year age difference between the singer and the 31-year-old coach, which may not mean a lot now, but Tony says that Christina, Britney Spears, and Justin Timberlake were part of the younger members of the series’ cast and often played the “little siblings.” Tony further addressed the age gap when reporters asked about Christina’s admission that Britney had a crush on him back in the day.

[SMART-PHONE FRIENDLY]
“They kind of looked up to us and found out where we did all our shopping,” Tony recalls. “They'd go out and buy some of our clothes… I was dating Keri Russell at the time and I know that Britney and Christina just thought the world of her and looked up to her. Maybe, in that light it would be apparent that there was a crush or something. But no, not like something that was ever acted upon or initiated or anything like that at all. It was much more like a little sister-type thing. My wife got the biggest kick out of that.”

After Disney Channel canceled The Mickey Mouse Club in 1994, Tony moved to Los Angeles to act. He later became a fulltime musician releasing more than seven studio albums and five EPs, as well as working as a touring musician for several acts including fellow mouseketeers JC Chasez and Justin's group, 'N Sync.