[NEWS] TATTOOS THE COACHES OF NBC'S 'THE VOICE' "REGRET" GETTING DONE 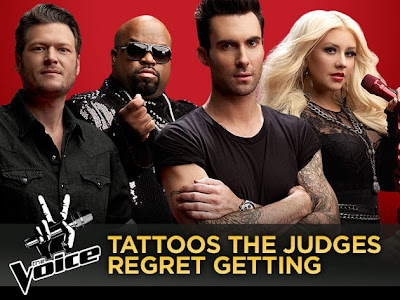 There's no shortage of ink amongst "The Voice" judging panel -- Adam Levine, Blake Shelton, Cee Lo Green, and Christina Aguilera all rock multiple tattoos. But with so many tats, there's bound to be one that they regret going under the needle for. Click through this slideshow to see the judges' unfortunate choices. 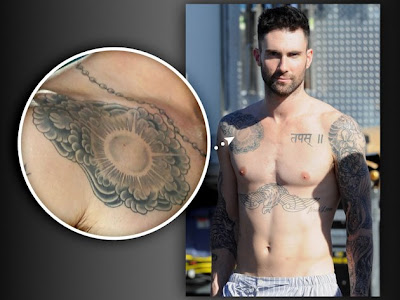 In a recent interview with Anderson Cooper, Adam Levine revealed that the tattoo on his right shoulder is "pretty stupid." When Adam saw a guy with a cool-looking Russian-like tattoo, he tried to mimic it and ended up getting inked with a "horrible bastardized version" instead. In hindsight, he admits he probably shouldn't have gotten the tattoo in the first place because he's "not tough." Adam told Anderson that he tried to hide the tat by surrounding it with something else, but now it just looks like "a cauliflower with a sun in the middle of it." 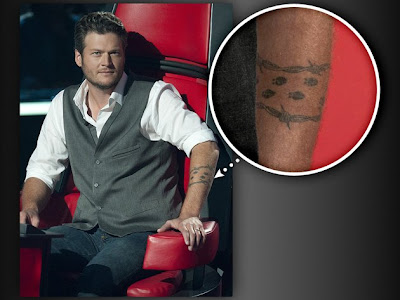 Blake Shelton has said before, "I probably have the crappiest tattoo, not only in country music, but maybe in the world." The tattoo he's referring to is a trail of deer tracks around his left forearm representing his love of hunting. Unfortunately, the deer tracks are constantly mistaken for ladybugs. Annoyed, Blake added a coil of barbed wire to the design, hoping to make it look "more manly." 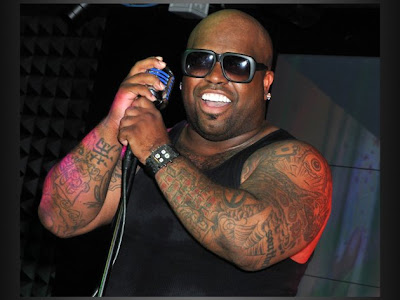 Cee Lo Green has tattoos all over his body -- even his face -- so it's surprising to know that he actually walked out of a tattoo parlor in the middle of getting his back inked because he was in too much pain. "I think that the tree on my back gave me the most pain. When you get your arms done ... if you can see what's going on, then maybe, psychologically, you think you can control it. Apparently you can, because it doesn't hurt so bad. With your back, you're lying on your front getting the tattoo and you just feel totally out of control -- you can't get a gauge on whether they're close to completion. So I gave up on it and I have an unfinished tattoo on my back. It was meant to be a family tree; I haven't been in a rush to finish it." That explains why we couldn't find a photo of the unfinished tattoo. 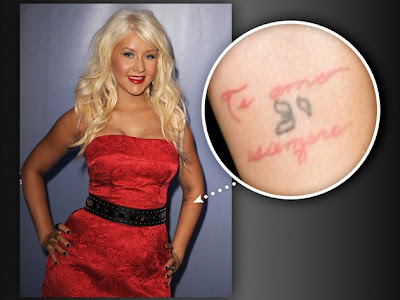 Christina Aguilera has a tattoo located on the inner part of her left elbow that's supposed to be the initials of her ex-husband, Jordan Bratman, in Hebrew. Unfortunately, the combination of the characters Xtina got actually means "12" and not "JB." Considering that she's no longer with Jordan, that might not be such a bad thing.

Source: Yahoo!
Posted by AGUILERA ONLINE™ at 2:36 AM