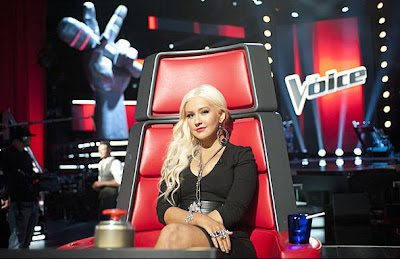 Christina Aguilera is a “nightmare to work with” on “The Voice,” claims In Touch.

The tabloid says the judge “hasn’t eased up on the partying one iota” since her arrest for public intoxication a year ago, supposedly making things difficult for the show as the staff scrambles to make Aguilera TV-ready.

A so-called In Touch “insider” alleges, “She’s even shown up on set looking bloated and hungover.”

The mag goes so far as to say, “It’s gotten so bad that frustrated producers are considering giving Christina a curfew on the nights before tapings.”

Aguilera also “seems distracted while filming, to the point where producers have to feed her lines,” insists In Touch.

“She’s a disaster. They have to work hard to keep her on track,” claims the tab’s “insider.”

The only “disaster” here is the “reporting” from In Touch, which last year wrongly claimed that there were all sorts of problems with Aguilera on “The Voice,” including an alleged feud with Adam Levine.

It was not true then, either, and the show’s host, Carson Daly, slammed the rumors himself.

(Aguilera and Levine, of course, wound up collaborating on a massive hit song together.)

The mag’s latest report about Aguilera being a mess on set is “false,” a source close to the singer tells Gossip Cop, pointing out that the show hasn’t been filmed since October and November 2011.