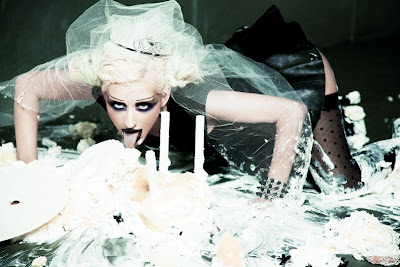 If there's one thing Rihanna has shown us over the past couple of years (besides a fondness for the smell of, erm, "sex in the air"), it's that she isn't exactly against collaborating with other artists.

Now it seems Christina Aguilera is next on her list, after the 'You Da One' hit maker posted a series of tweets to her Twitter account suggesting a hook-up with the talent show judge will be released in the very near future.

Referencing a short track on her new album Talk That Talk that is expected to be re-released as a full-length song, she said: "Would y'all be mad if Birthday #CAKE became a single?

"Now here's the trick question! #IF I put collaborator on it, who would u wanna see lick the icing off????? #CAKE"

Appearing to reference one of Aguilera's most successful singles, she teased: "I need somebody #DIRRRTY on my Birthday #CAKE ;) lol"

Would you like to see Christina and RiRi join forces?

Source: EntertainmentWise
Posted by AGUILERA ONLINE™ at 7:40 AM