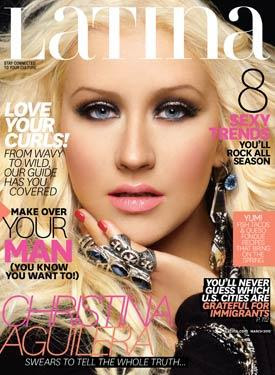 Music superstar Christina Aguilera graces the cover of Latina magazine's March 2012 issue, which hits newsstands on Tuesday, February 14. The 31-year-old Ecuadorean singer opens up to Latina about marrying young, her estranged relationship with her father and being a proud Latina woman.

On getting married and divorced at a young age: “Was I too young? Not at all. I did the exact right thing at the time….I definitely wasn’t too young. I have always been older than my age.”

On growing older: “I was on the set of a film and the choreographer was 19 and I looked around at all the dancers and I was like, 'Whoa! I’m the oldest person in this room. When did that happen?'”

On reconnecting with her father: “I’ve talked about how rough things were for me and I’m sure he’s heard it. He can’t be thrilled about it. So maybe one day we can do lunch…I’m 31 years old now. Maybe it’s time.”

On resting up from the intensity of shooting The Voice: “When I’m shooting The Voice, it’s intense. On a day like today, my ex has my son and we are not shooting, so I slept and I just slept. I love doing everything in my bed. Eating, sleeping…It’s my domain and my throne…I do it all in my bed.”

On how she handles gossip and brutal reviews: “I don’t read them. Ever…Why read what people are saying—good or bad?”

On criticisms of not being Latina enough: “I’ve dealt with that my whole life. I don’t speak the language fluently. And I’m split right down the middle, half Irish and half Ecuadorean. I should not have to prove my ethnicity to anyone. I know who I am.”

Source: Latina Magazine
Posted by AGUILERA ONLINE™ at 7:08 AM