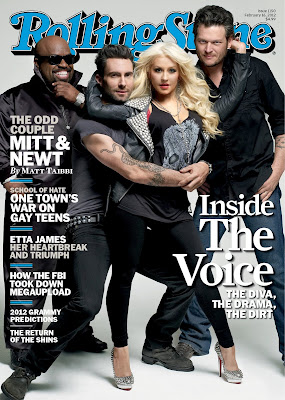 At its heart, The Voice is a game show, and the most essential rules that guide its coaches are unspoken: Try not to wince when blind auditions trick you into picking an unsightly singer; always declare it "heartbreaking" to choose the winner of a vocal battle, no matter how easy the decision actually is; and most importantly, never, ever interrupt Christina Aguilera when she is speaking.

One late afternoon in a quiet backroom of a Los Angeles photo studio, Aguilera is curled up, barefoot, on a white couch next to fellow coaches Adam Levine and Blake Shelton. She's sipping an iced coffee and holding forth on the greatness of the team of singers she's assembled for The Voice's second season, which begins February 5th in a prime post-Super Bowl slot: "In one of my battles," she says, "this girl and guy are doing Nirvana's 'Heart-Shaped Box,' and I'm not sure if people would even expect that from me..."

At that, Cee Lo Green – who's been splayed diagonally in a leather chair off to the side, in deep communion with the ceiling – snaps to attention and begins singing Kurt Cobain's melody in his high voice: "Hey, wait/I've got a new complaint..."

Aguilera flares up like a sexy puffer fish, swiveling her bleach-blond head in his direction, red lips pursed, blue eyes blazing with imperial annoyance. "Yes, Cee Lo," she says, as if she's talking to her four-year-old son. "This is my floor here!" He stops singing, and Aguilera laughs, already over it: "You wake him up and now he's interrupting everybody's ****!"

The unlikely stars of The Voice – last season's highest-rated NBC entertainment show – have a surprisingly warm off-camera rapport for four people who have no real business being in a room together. "Just look at the four of us," says Levine. "It's just so wrong and so amazing."

As widespread gossip would have it, the other three supposedly resent Aguilera for various alleged sins, including tardiness, imperiousness and earning more money than them – but there's not much evidence of that today. "'Supposedly' is the key word," Aguilera says, with a big laugh. Levine and Shelton just attended Aguilera's 31st birthday party at a Hollywood bowling alley; Cee Lo skipped it only because he was out of town.

They spend a lot of time teasing one another. Oklahoma native Shelton – a singer with 10 Number One country hits to his name but little recognition outside his genre before The Voice debuted last April – is a frequent target of hick jokes. Shelton, 35, has been on an Eighties kick lately, so he plays Young MC's "Bust a Move" on his iPhone's tinny speakers. Says Levine, "Blake thinks this song came out two weeks ago." But they're also jealous of his cowboy cool: "Blake can say anything or do anything," Levine adds. "If I was like, 'I'm drunk at 4:00!' I'd be attacked. He's like, 'It's cool, **** you, I just shot a ****ing moose, kiss my ass!' He can say whatever he wants."

Cee Lo, 37, is the designated oddball, the ruler and sole inhabitant of what Shelton calls "Cee Lo Land." At the moment, he's wearing a black tank top and long black shorts, plus sandals over white socks. "He can wear white socks with sandals and still have it be ****ing cool," says Levine. "If I did that, Blake would make fun of me."

If Aguilera occasionally has to go full diva, on-camera or off-, she sees it as the only way to hold her own. "You have to be a pretty strong girl to stay up in the mix with the guys," she says. "It's a lot. It's a crazy locker-room kind of situation."

Levine, his tattooed, yoga-toned arms exposed by a sleeveless shirt, turns to Aguilera. "I honestly just recently started realizing that you're surrounded by three dudes all the time, and that has to be something of a pain in the ass," he says. But they've made some concessions: "We stopped farting in front of her!"

Aguilera rolls her eyes: "You had a nasty burp at the Super Bowl commercial, though."

Source: RollingStone
Posted by AGUILERA ONLINE™ at 6:24 AM