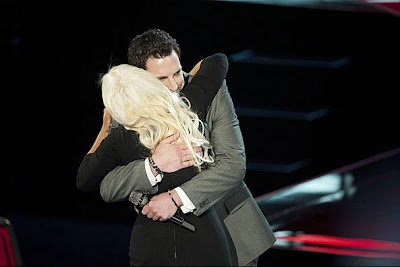 1) If you could travel anywhere in the world right now, where would you go?


Dubai. I want to play tennis on top of the Burj Al Arab Hotel. Is that too much to ask?! It's the highest tennis court in the world. I'm a huge tennis fan so that would be amazing...unless I fell off.

2) Who is your celebrity crush?


Aimee Teegarden from Friday Night Lights. I'm catching up on the whole series on Netflix right now--I'm only 6 years behind. My other crush is Casey Rose Wilson and, well, the entire cast of Happy Endings.

3) What song is currently your guilty pleasure?


"Who Says" by Demi Lovato. Guilty as charged.


Ben Stiller...duh. I have a natural Blue Steel face and am also "ridiculously good looking."

5) What's your favorite song from your coach?


Genie in a Bottle--the Original. Ironically, I remember seeing the video for the first time on a church ski trip in high school. My other favorite song from Xtina is "Walk Away" from the Stripped album. Wait...I lied--I have the fondest memory of driving from Nashville to Kansas with 2 friends from college and jamming "Infatuation" (from the 2002 Winter Olympics live version) the whole way. The extremely white announcer and the hand clapping breakdown at the end are noteworthy.

6) What was your first concert ever?


Four. One on my forearm in Italian that says "Canto e Vivo" meaning "I sing and I live" and another on my (bulging) bicep in Coptic meaning "Without limits." I also have one on my back in Coptic that says "Dreams, Determination, Success and Faith" in a circle around the Chi Rho symbol.My newest one is on my left forearm--it's a chain with a roman numeral 5 hanging from it meaning "fifth time's a charm." I've been knocked down so many times on this musical journey but I keep getting up and trying again. For me it ain't "third time's a charm"...that one happened years ago.

My tattoos are basically my road map in life. I'm planning my next one now...it's going to be a map of Hogwarts on my lower back.