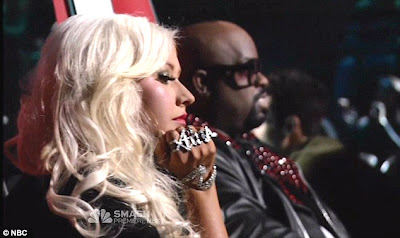 I really enjoyed last night’s episode. The theme now is prepare for battle! If the blind auditions are about falling in love with artists, the battle rounds are about earning your respect and earning your keep. It’s one of the things we really liked about this format, and it’s one of the things that’s really risky, too. America’s in love with the blind auditions, but all of a sudden there’s an evolution here, and we’re switching gears next week. Watch a sneak peek of the battle rounds. But last night was about filling up the team, and although the coaches were still very picky, there was some really great talent.

I loved how the show opened with Whitney Myer. I love her story. She tours with her family, and it’s like the 1970s in her world, like the Brady Bunch. But more importantly, I really liked her voice a lot. I thought she was really a strong artist, and got the show off to a great start.

I think the Shields brothers are a good example of Cee Lo proving time and time again that success in music is as much about talent as it is entertainment. Cee Lo is definitely the most business savvy of all of our coaches. Cee Lo sees more than just a good voice. He’s already a step ahead; he’s looking to who’s marketable, who can put butts in seats, if you will, and that’s the way an entrepreneur thinks. You’ve got to entertain a crowd, and you’ve got to put on a show. He looks at the Shields brothers like he does Tony Vincent, as artists that could really be entertaining, which is an equally important weapon to have in your team of 12.

One of my favorite artists last night was Lex Land, who’s actually been on my late night show before. I saw her at South by Southwest several years ago and my staff and I loved her so much. She was really nervous and gave sort of a lackluster performance — she almost didn’t sound good at points — and I know that she’s capable of more, but she still got 3 out of the 4 chairs to turn around. She’s an exciting artist to watch and it’ll be fun to see her battle. That was a real highlight.

With Cameron Novack, I think the coaches made the right call. There was this talk about “Can we break the rules?” but as Cee Lo said, it jeopardizes the integrity of the whole show. The coaches are going to have regrets, and Cameron was Cee Lo’s regret. Cameron seemed to be a lightning rod on Twitter. People wrote to me, “I loved him in an Adam Lambert way!” or they said, “Absolutely not.” I got no gray area on Cameron.

I liked Wade’s version of “Rehab.” I like it when our artists give us their own take on a song. Wade is a student of music, as we learned, and he showed great respect for old school music and the Marvin Gayes of the world. He showed originality, he paid homage to the music that he loves most, and he showed so much talent and range. Really, that was a smart move by him. And he looked like a mini Cee Lo! They had a little brother, big brother thing going on, and their immediate affection for one another was contagious.

I really loved Sera Hill. I liked how the show closed with her, and I loved her personality. When Christina came out on stage, Sera looked as surprised as Taylor Swift looked the very first time she won an award. And when Christina kissed her on stage, she was just trying to hold on to the kiss, grabbing it out of thin air. A couple people asked me last night whether Christina’s performance was planned. The truth is, there are microphones around those coaches at all times if they ever feel inspired to get up and sing. What you saw there was an impromptu jam moment, which is the most fun to witness, just to see the look on Sera’s face. It’s one thing for her to be on Christina’s team, but it’s another for your coach to immediately want to sing with you. That was a really great moment and a looking glass into how, when the show is firing on all cylinders, it provides moments like that.

There was a lot of concern about my well-being after Adley Stump’s mother jumped on me, literally, leaped across the room, like a scene from Black Swan. This was like my audition for Dancing With the Non-Stars. But I caught her, because safety first, Mrs. Stump. Everybody asked, “Are you okay!?” and I want America to know that I am very strong and I proved it last night. I am recuperating!

Another thing I want to mention that America will be thrilled about in the battle rounds is… new wardrobe for all the coaches! What Purrfect the Cat was for conversation during the blind auditions, Christina Aguilera’s compact-disc hat will be for the battle rounds.

What people are watching throughout The Voice is a snapshot into what the music business used to be able to do well and just doesn’t do anymore. There is a process to music: There is a discovery process, there is a mentoring process, and then there is a “let’s see how far your dove can fly” process. Those are the three pillars of real A&R, and this is how the process happens. And there’s a fight in it all, and the fight is the battle rounds. The battles are in the ring and they’re ferocious. The coaches want to enter the live shows with the most diverse teams that they can get. It’s like Gladiator: Win the crowd, win your freedom. It’s been about building these teams, and now it’s about fighting to stay on them.