[NEWS] BLAKE SHELTON: 'CHRISTINA AGUILERA WAS MY FREE PASS BEFORE I WED' 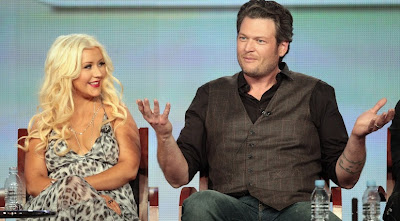 Country star Blake Shelton left his fellow 'The Voice' coach Christina Aguilera stunned when he confessed to a major crush on her - because she was convinced the country star didn't like her.

The odd couple was getting to know each other on the set of the hit TV talent show when Aguilera asked Shelton's wife Miranda Lambert for pointers, and she revealed that she had once gifted her man a signed Aguilera tour book - and he was thrilled.

Aguilera started to see Shelton in a different light - especially when he told her she was his "free pass" before he wed Lambert, suggesting that the new Mrs. Shelton had agreed she'd be OK if her man cheated on her with Aguilera.