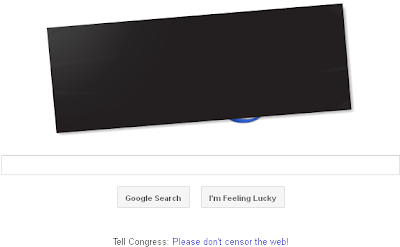 When Google speaks, the world listens.

And today, when Google asked its users to sign a petition protesting two anti-piracy laws circulating in Congress, millions responded.

A spokeswoman for Google confirmed that 4.5 million people added their names to the company's anti-SOPA petition today.

The petition, which was available via a link from Google's homepage, states that although fighting online piracy is important, the plan of attack described in the SOPA and PIPA bills would be ineffective.

"There’s no need to make American social networks, blogs and search engines censor the Internet or undermine the existing laws that have enabled the Web to thrive, creating millions of U.S. jobs," the petition reads. "Too much is at stake -– please vote NO on PIPA and SOPA."

The search engine frequently delights users by toying with its homepage logo, but on Wednesday it did something it had never done before: it blocked out its logo completely.

A link below the blackout read "Tell Congress: Please don't censor the web!" and lead to a page with the petition.

Of course, Google's anti-SOPA and PIPA petition is not the only one out there on this day of mass online protest. As of this writing 1.458 million people signed a similar petition at the activist website Avaaz.org, and Fight for the Future said that between its two sites, Sopastrike.com and AmericanCensorship.org, at least 350,000 people have sent emails to representatives in the House and Senate.

A graphic put out by Google shows that before today's coordinated protests, 3 million Americans had signed various petitions against the two bills. 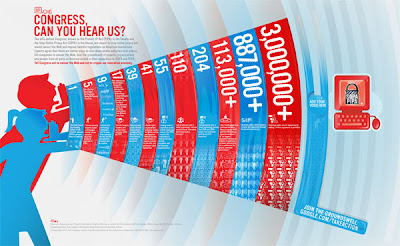 In other SOPA number news, a spokeswoman from the popular blogging platform WordPress, said that at last count, 25,000 WordPress blogs had joined the SOPA and PIPA protest by blacking out their blogs entirely, and another 12,500 used the "Stop Censorship" ribbon.

Today, the White House Blog reports that 103,785 people signed petitions through the We The People website asking the president to protect a free and open Internet.

Obviously Karlos and I agree that AguileraOnline's content is priceless and we take these impending threats very seriously, as should you. If you have yet to sign the petition, CLICK HERE. Otherwise, this could be a very dark and depressing reality.

Posted by AGUILERA ONLINE™ at 4:45 PM