[NEWS] WHY ETTA JAMES WAS THE ORIGINAL DIVA OF THE BLUES 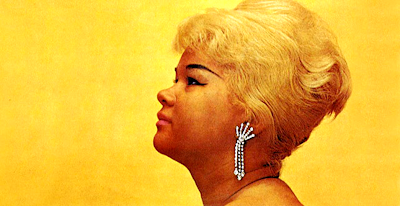 With a platinum blond bouffant, the heaviest of black eyeliner, and a reverberating contralto voice, Etta James tore a hole through the unforgiving blues. Her artistry scrapped the gut-bucket of pain and led the way for women who didn't mind getting rugged onstage. Before Aretha Franklin and Tina Turner, there was the megapower of soul: Etta James.

Born Jamesetta Hawkins on January 25, 1938, in the South-Central area of Los Angeles, Etta was the first "bad girl" of R&B. She famously performed with Ace bandages on her arms to cover up track marks from a severe heroin addiction, her rap sheet was as long as Lindsay Lohan's, and she hung tough with drag queens as a teen. One of her many arrests was with a handful of queens at an Indianapolis hotel for being unmarried and sharing a room with a member of the opposite sex. In an era when women had to be prim and proper, she bucked authority and was apologetically Etta.

Etta said in her 2003 autobiography, Rage to Survive,

She was as tough as the blues and had the warrior marks to prove it. However, after a long battle with cancer, Etta James died today at the age of 73.

Also known as Miss Peaches, she had her first number 1 R&B hit at the age of 14 in 1954 as the lead singer of a trio called the Peaches. But it was her 1960 solo deal under Chess Records that would make James a household name. Songs like "All I Could Do is Cry” and "A Sunday Kind of Love" ruled the airwaves. And then the classic that would change her life forever: 1961's "At Last" from the album At Last! Written by Mack Gordon and Harry Warren and performed by Glenn Miller in 1941, the song gave Etta her signature hit.

Even with all of her success, James was wildly exploited by her record label, not receiving the money she earned. Soon after, Etta’s addictions got the best of her. In 2006 she told Gay City News that Billie Holiday had personally warned her to "not to get caught up staying up late and drinking and partying." Etta didn't heed the warning. By the age of 21, Etta developed a full-blown addiction to heroin.

For decades, Etta struggled with heroin, overdosing many times and nearly losing the battle like her idol, Holiday. In 1974 she faced the possibility of nearly 10 years in prison for heroin possession and forgery. Luckily, she was sentenced to 17 months of drug rehab. But Etta would relapse several times. She didn’t officially kick the habit until the age of 50 in 1988.

In later years Etta’s career would get a revival mainly due to Christina Aguilera famously covering “At Last” and consistently crediting James. The “Beautiful” songstress told InStyle in 2006, "Etta is my all-time favorite singer. I've said it for the last seven years — since I had my first debut record out — in every interview. I mean, all of Etta's old songs, countless songs I could name, I grew up listening to."

In 2009, Etta was thrown into the biggest controversy of her career with another pop diva. At the first inaugural ball for President Obama on January 20, Beyoncé Knowles sang “At Last” — a song she had recently recorded after playing Etta James in the movie Cadillac Records. Eight days later, Miss Peaches told a Seattle audience that she "can't stand Beyoncé" and that the diva would “get her ass whipped” for singing “At Last” to the president. Etta’s son later said the outburst was due to a "drug-induced dementia.” Regardless of the media firestorm, she was clearly joking and just being Etta James. From the start of her career, Etta bucked charm school, never aiming for perfection. She was a down-home woman who endured the horrors of sexism, racism, and heartbreak that a pop star like Beyoncé will thankfully never experience. So if Etta said she wants to whip someone's ass, so be it — she is a diva who earned it!

Through all of Etta's tragedies, she survived rock and roll, unlike the cursed 27 club (Jimi Hendrix, Janis Joplin, Kurt Cobain, Amy Winehouse, etc.). Her life was colored with the deepest of blues, but she was no casualty. Mama pulled herself up by her garter belt, dusted off her wig, and rightfully became known as one of the greatest voices of all time. While many remember Etta for “At Last,” her greatest song is arguably “I’d Rather Go Blind,” which she wrote back in 1968:


"I looked down in the glass / That I held to my lips / And I saw the reflection of the tears rolling down my face / That's when I knew loved you / I can't live without you / I'd rather be a blind girl."

If that isn’t the blues personified, then I don’t know what is.

If anyone crushes your heart and all you could do is cry, you better put on some Etta James because mama will make it better. At last, the woman who survived the blues has gone home.

Email ThisBlogThis!Share to TwitterShare to FacebookShare to Pinterest
Tags: AT LAST, CHRISTINA AGUILERA, ETTA JAMES, INSTYLE, INTERVIEW, SOMETHING'S GOT A HOLD ON ME, TRIBUTE