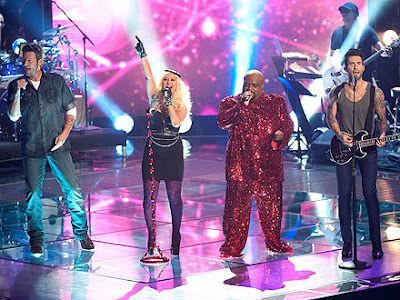 Although The Voice will premiere Sunday – right after the Super Bowl – it won't be until night two that the coaches Blake Shelton, Christina Aguilera, Cee Lo Green and Adam Levine will perform a rocking Prince medley.

The two-hour show will also feature more blind auditions as the coaches build their teams and prepare to go head-to-head in a full season of NBC's hit singing competition.

Just don't expect to see a slew of bad singers.

"We all told them we're not signing up for this show if it's about ridiculing someone or mocking talent," Aguilera told reporters this month.

"This show is about artist development," added Green.

Prepared to defend his winning title, Levine, who coached season 1 winner Javier Colon, says the level of talent this year "is pretty high, so you can be honest and say, 'This isn't your best,' rather than they suck."

Posted by AGUILERA ONLINE™ at 5:15 PM