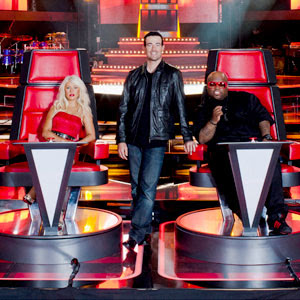 One thing The Voice definitely has going for it? It's colorful group of coaches that are not afraid to speak their minds.

Not only did Christina Aguilera, Cee Lo Green, Adam Levine and Blake Shelton talk about season two's big talent, they made a big statement about the current (bleak) condition of the record industry and how The Voice fits into the big picture…

The whole panel today at the Television Critics Association Press Tour agreed that right now, record companies are focusing too much on an artist's "package," and not just their talent. "[The Voice] really gives artists that aren't so mainstream or commercially approachable [a chance]," says Aguilera. "It's about taking it back to the real heart of music. We all are [drawn to packages]. But then again there's that raw talent that draws you in."

"I trust the show more than I trust the record industry at this point," echoed Levine. "I'm really passionate about this show being a new avenue [for new artists]."

As for season two, the gang really stressed how many different genres will be represented this time around. "This year is so versatile. You have so many different kinds of genres," Aguilera says. At first she remained coy on a certain type of genre on her team, but eventually it got out that a rapper is being featured this season.

And since it's not TCA without someone asking questions not related to the show the panel is representing, Green's lyric change to John Lennon's "Imagine" on New Year's Eve was brought up. "It was all done out of love and peace and unity and tolerance," he said. "I believe [in] speaking out and being yourself. I'm pro choice. I'm pro-expression. That's just me. I meant no harm and no disrespect."

Finally, critics were also quick to point out that last season's contestants debut albums barely registered on the charts. In response, Levine said: "We can't control everything that happens in the record industry. You got to set it free at a certain point. You can't be there for every step of the way. I would like to see people be as successful as possible."

Host Carson Daly added: "Those albums are arguably better than those in the top 50, so it's all perspective. The music that [season one contestants] put out, I would take that to a music street fight any day."

The Voice returns with its second season on Feb. 5 after the Super Bowl.

NBC and E! are both part of the NBCUniversal family.

Source: E! Online
Posted by AGUILERA ONLINE™ at 9:11 AM