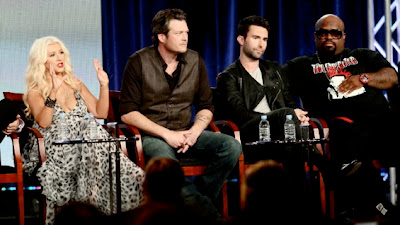 The executive producer and stars (or coaches) of NBC’s The Voice had no problem distinguishing their show from the glut of singing competition shows dotting the television landscape.

The show usually makes a big deal about its blind auditions, the item that makes them the most obviously different from other competitions and Friday's TCA session was no different. But, they also touched on something that makes them especially different: The fact that they don't even air the bad auditions.

"The idea of finding people who couldn’t sing and making a mockery of someone" isn't the show's style, executive producer Mark Burnett says and the show's stars firmly back him up on that.

“We all told them we’re not signing up for this show if it’s about ridiculing someone or mocking talent,” said Christina Aguilera, in a thinly veiled swipe at Fox’s American Idol and X Factor.

And Adam Levine explains that the talent level definitely makes the critiques different, as well. There's a difference between being critical and just willfully mean. The talent level, especially this year is pretty high that you can be honest and say, 'This isn’t your best' rather than they suck."

At the same time, Burnett knows that fans have been trained by its competition to expect the conflict that bad talent and judges' comments bring to a show such as this one. He says that's replaced on The Voice with the idea of superstar judges begging unknowns to join their teams and competing against each other throughout the competition.

The Voice has become a bright spot for basement-dwelling NBC. And the network will bow the second season of the show Feb. 5 after NBC’s telecast of the Super Bowl, giving The Voice a monster lead-in that will expose the show to millions of potential new fans and likely juice the show’s season tune-in average for the entire season.

Asked if he learned anything from Simon Cowell’s overblown ratings forecast for the premiere of The X Factor, Burnett bluntly replied: “I’m hoping the lesson learned there is say less about your big predictions. I’m not that good at predictions.”

Source: The Hollywood Reporter
Posted by AGUILERA ONLINE™ at 9:16 AM