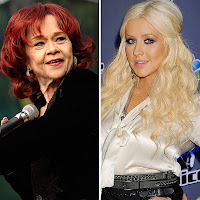 Etta James' recent passing has lead to some of music's leading powerhouse voices covering the blues.

First, Kelly Clarkson paid an AH-MAZING tribute with her rendition of "I'd Rather Go Blind." And this weekend, Christina Aguilera delivered with her version of "At Last" during Etta's funeral.

The clip begins with Christina offering a heartfelt confession about the impact Etta left on Aguilera's own musical career. Then, the Grammy winner closes her eyes and begins belting out the opening notes to one of the most stunning renditions of "At Last" we've ever heard.

She channels her inner Etta and embraces a raspy, raw expression, closely resembling the intensity of the original. Christina reminds us that she can still hit and hold any note she damn well pleases and does it so flawlessly that she brings the entire audience to their feet.


We've definitely never been to a funeral where people openly cheer and offer a standing O -- then again, we've never attended a funeral where Christina Aguilera was performing. We think Christina did the classic song justice, and we think Etta herself would agree with us. Check out the video.