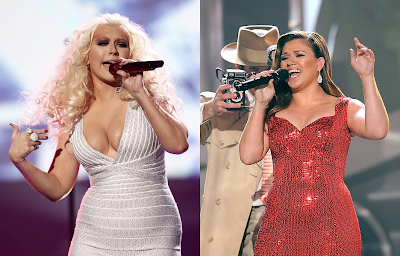 Kelly Clarkson will perform on “Saturday Night Live” for a third time this weekend (alongside host Charles Barkley), and the “Mr. Know It All” singer is looking forward to returning to the late night comedy show.

“It’s so much fun,” Kelly – who was looking fabulous, sporting sexy, newly-cropped bangs – told Access Hollywood during “SNL” rehearsals in New York on Thursday. “Everybody’s always so nice here and the cast is like a family, so it’s a really cool environment.”

The singer, whose fifth studio album, “Stronger,” is steadily climbing up the music charts, said she loves acting in skits, but doesn’t believe she’ll be able to take part in any of the sketches this time around due to her out-of-state tour rehearsals.

If Kelly’s schedule were to miraculously allow the singer to appear in a sketch, she’s prepared with an idea of who she’d like to play – fellow chart-topper/“The Voice” mentor Christina Aguilera.

“My skit I wanted to do was ‘The Voice,’” she told Access, referencing the hit NBC reality singing competition. “I wanted [Charles] to be on his knees and play Cee Lo [Green] and I wanted to be Christina.

“I just love that show, so I wanted to totally make fun of it,” she added with a laugh. “I make fun of things I like!”