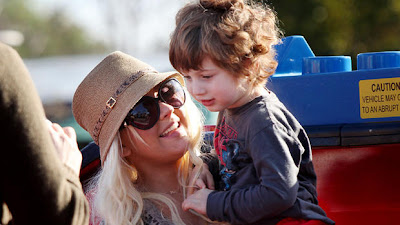 So you’re one of the biggest pop star/divas in the world and it’s your son’s 4th birthday. How do you celebrate? Like millions before you, you head to Legoland, of course.

Anyway, that’s what R&B princess Christina Aguilera did Thursday, taking the same tiny-toy decorated paths in Carlsbad that so many other parents have before them. The difference is that when Christina does it, she wears a short-brim fedora and huge shades in an apparent attempt at being incognito, and brings along her boyfriend, Matt Rutler, and about 20 other people – including four friends of her son, Max.

Why Legoland? Maybe because Max was here last year with Mom and Matt on Valentine’s Day and couldn’t get those slow, tiny boats out of his head.

On Tuesday, Christina & Co. took Max and his crew to the Fun Town Police and Fire Academy, riding the pump-action fire truck, headed over to Miniland Las Vegas – you knew that was gonna happen – rode Treasure Falls and the Flight Squadron, and took a spin on the Volvo Driving School Track, among other things. Afterward, they made a stop at Fun Town Market for dinner, where Max opened his presents and finally got a look at his birthday cake before blowing out the (presumably) five candles.

A tough act to follow, right? Maybe not, Christina and Matt made their way down to the Hard Rock Hotel in San Diego afterward, where a paparazzo snapped Christina in her little black dress by with her beau in the foyer. We’re still tracking down where the couple kept the night going.