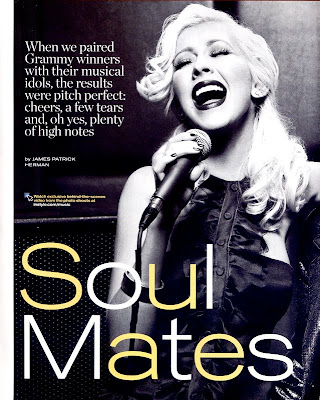 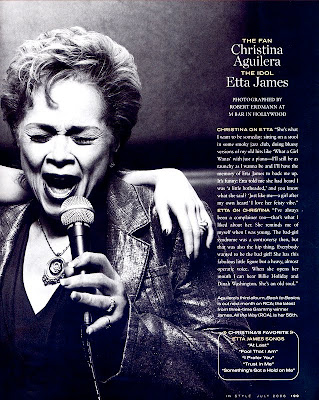 Christina Aguilera says she can die happy now — because she's met her idol, legendary R&B singer Etta James. The two posed together for a photo spread in the July issue of InStyle, which matched up singers with their musical mentors.

The pairings include Mary J. Blige with Chaka Khan, John Legend with Quincy Jones, Fergie with Rita Marley, and Faith Hill with Aretha Franklin. But Aguilera's coupling with James nearly brought the singer to tears because James seemed to idolize her too.

"Etta is my all-time favorite singer," Aguilera explained. "I've said it for the last seven years — since I had my first debut record out — in every interview, in every story, in every on- and off-camera question. I mean, all of Etta's old songs, countless songs I could name, I grew up listening to. That music was always such a huge escape for me, even from a young age."

When she was about 7 years old, Aguilera's grandmother used to take her to look for vintage records, which was how she got introduced to soul, jazz and blues. "There was such soul, emotion and raw heart in it," Aguilera said. "So much real heart and emotion that's lacking in music today. You used to have to sing and convey emotion, and now, well, technically you can do anything with technology. It sucks for music today, but that's why that old music feels so good to me." Aguilera said she was a "bundle of nerves" before meeting James. Little did she know, James had already been won over.

"When I first heard her stuff, and I heard her say on TV, [in response to the question] where she got her style, 'I grew up on Etta James,' that made me feel so good," James said. "The last person who said that was Janis Joplin, but Christina can sing. Janis was good, but there's a difference in the quality of voice. I couldn't believe that big sound, that big voice was coming out of her. Tell me who you've seen that sings like her, because we don't have anybody. "It's like you were here many years ago," she told Aguilera. "You don't look exactly like them, but there's something about you that's like Dinah Washington, Billie Holiday, those kinds of chicks. I've never seen a girl sing as tough as you sing, as little as you are. It's like you're an old soul."

Aguilera gasped, and James put her head on her shoulder adoringly.

During the photo shoot, James sat at a piano and sang R. Kelly's "I Believe I Can Fly" while Aguilera looked on in awe. Even though it wasn't one of Aguilera's favorite songs that Etta sings — those would be "At Last," "Fool That I Am," "I Prefer You," "Trust in Me" and "Something's Got a Hold on Me" — she joined in for an impromptu gospel number. 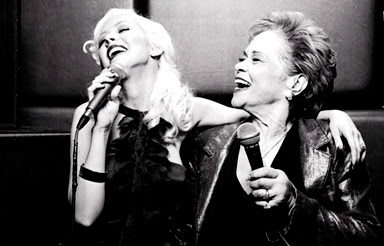 Perhaps it was a warm-up for Aguilera's upcoming tour of blues and jazz clubs to promote her Back to Basics LP, due August 15. Aguilera said

"She’s what I want to be someday; sitting on a stool in some smokey jazz club, doing bluesy versions of my old hits like “What A Girl Wants” with just a piano — I’ll still be as raunchy as I wanna be and I’ll have the memory of Etta James to back me up."

James says Aguilera is already well on her way.

"She reminds me of myself when I was young," she said. "I've always been a complainer, too, that's what I liked about her. The bad-girl syndrome was a controversy then, but that was always the hip thing. Everybody wanted to be the bad girl!"

"It's funny," Aguilera said. "Etta had told me she had heard I was 'a little hotheaded,' and you know what she said? 'Just like me — a girl after her own heart!' I love her feisty vibe"