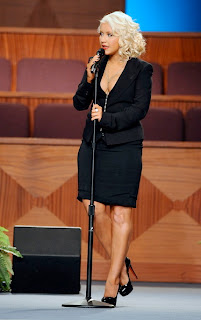 The funeral for the late great Etta James, who died January 20 at age 73, was held yesterday, and the list of attendees read like a who's who in Hollywood -- particularly the music industry.

Reverend Al Sharpton officiated the private ceremony at the City of Refuge Church in Gardenia, California, where he read a personal note from President Obama which stated,"Etta will be remembered for her legendary voice and for her many contributions to our nation's musical heritage." Other celebrities present at the sad occasion were Christina Aguilera and Stevie Wonder, both who performed.

It was a somber event, and Etta is clearly going to be missed by all. But it was Aguilera's moving performance of "At Last", which she actually regularly includes in her concerts, that stole the show. Check out the video.

It can't be easy to perform one of your idol's most well-known songs at her funeral, but Christina nailed it, singing with love, grace, and respect. It was beautiful, and totally didn't seem like a "look at me, I'm a celebrity" moment. And, wow, what an honor it must have been to have been asked to perform. Christina told People,


"Etta wasn't just any performer, she was a strong woman whose talent came from a place so deep it moved people in ways they never felt before. Losing her was, to me, like losing a part of my soul."

The impact Etta had on the music industry -- and Christina-- clearly is indelible. And although the world is a bit darker without her in it, her legend will undoubtedly live on forever. Especially if Christina has anything to do with it. Nice job, girl.

Source: The Stir
Posted by AGUILERA ONLINE™ at 10:13 PM