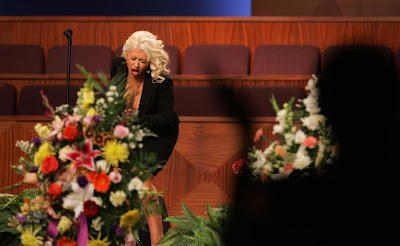 The funeral of R&B legend Etta James was a star-studded affair, with appearances by Stevie Wonder and Christina Aguilera.

The event was held yesterday in the City of Refuge Church in Gardena, California.

Aguilera was a long-time admirer of James, and paid tribute to her idol by singing James’s signature song “At Last.” It’s a tune that has been much covered over the years; notably, Beyonce sang it while President Barack Obama and First Lady Michelle Obama took their first dance at an inaugural ball in Washington, D.C. (Beyonce also played James in the 2008 movie “Cadillac Records.”) The song was written in 1941 and James popularized it in the early 1960s.


“There’s a line in this song that says ‘I found a dream that I could speak to,’” Aguilera said before she began to sing. “And for me that dream, all my life, has been Etta James.”

Aguilera delivered a full-throated rendition, with minimal accompaniment. Her vocal swoops and growls drew appreciative cheers and whistles from the funeral goers.

Aguilera’s singing often spurs debate. Last year, her live version of “The Star-Spangled Banner” was roasted by some commentators when, caught up in the passion of the song, she fumbled a few lines. And her vocal runs during an Aretha Franklin tribute were so masterful, she may have overshadowed the other divas sharing the stage.

While Beyonce’s version of “At Last” was warm and urbane, Aguilera’s take on the song was hot and urban. Her fiery interpretation has won over some gospel lovers, but alienated some listeners who found her vocals overdone, and have sounded off across the web.


“Thank you Etta James for the inspiration–I love you,” Aguilera said at the end of her performance.

You can listen to the song here. What did you think of Aguilera’s version? How did you feel about Beyonce’s take? Leave your thoughts in the comments.