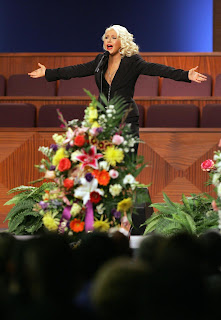 Christina Aguilera gave the performance of a lifetime when she sang "At Last" at Etta James' funeral. Aguilera poured all of her heart and soul into the performance to pay tribute to a woman she called "her idol."

Christina was dressed in a black suit and had her hair pulled into a sweeping up-do as she bravely stood before James' family and close friends and said,

"Out of all the singers that I've ever heard, she was the one that cut right to my soul and spoke to me."

It was clearly an emotional experience for Aguilera and it appeared that she had tears in her eyes as she began to sing.

She brought the crowd to their feet as she finished the song belting out notes that are impossible for most of today's stars. She has always been a fan of Etta's, she even sang the Etta James' song "A Sunday Kind of Love" on Star Search in 1990. That performance earned her second place on the popular televised talent show.

As much as Christina loved Etta, Etta seemed to love her too. Back in 2006, Etta had this to say about Christina,


"When I first heard her stuff, and I heard her say on TV, [in response to the question] where she got her style, 'I grew up on Etta James,' that made me feel so good. The last person who said that was Janis Joplin, but Christina can sing. Janis was good, but there's a difference in the quality of voice. I couldn't believe that big sound, that big voice was coming out of her. Tell me who you've seen that sings like her, because we don't have anybody."

Then to Aguilera she said,


"It's like you were here many years ago. You don't look exactly like them, but there's something about you that's like Dinah Washington, Billie Holiday, those kinds of chicks. I've never seen a girl sing as tough as you sing, as little as you are. It's like you're an old soul."

It was only fitting that Christina Aguilera sing "At Last" at Etta James' funeral. No one else could have done it better. Click HERE to see the performance, but you should probably grab some tissues first!