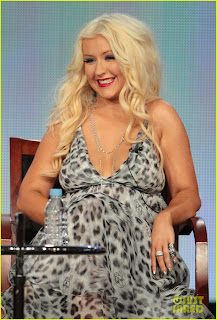 She may be a blog fixture for her hair, clothes or figure, but “The Voice’s” lone lady coach, Christina Aguilera, is totally comfortable in her own skin.

“I’ve been in this for a long time. I came out on the scene when I was 17 years old. ‘You can never be too much of anything. You can never be too prefect, too thin, too curvy, too voluptuous,’ this, that. I’ve been on all sides of the spectrum.. [Every] female in this business at one time or another has had criticism… and I’m always a risk taker too,” Christina said on Friday during NBC’s “The Voice” panel at the Television Critics Association Winter Session in Pasadena.

“I’m very confident in my body,” the singer continued. “I think my video works over the years have spoken to that… I’ve been no stranger to being very comfortable in my own skin,” she added.

Christina said despite the “massive scrutiny,” she’s happy and her boyfriend, Matthew Rutler, loves her curves.

“As long as I’m happy in my own skin, that’s all I need, that’s all the confirmation I need. I’m happy where I am, I have a boyfriend love that loves my body, I love my body, my son is healthy and happy. That’s all that matters,” she said.

The blonde said she also enjoys mentoring her “Voice” female team members, sharing her own experiences with body image and style criticisms.

“Being in a position to coach these young girls, is really a great thing for me to be able to share that with them, and also sharing my highs and lows along the way. I’m very open on the show about all of that,” she said.

In related “The Voice” news, show host and producer Carson Daly noted that when the show does return, it will feature a more unique crop of contestants than seen previously.

“Season 1 hit the air and people aspiring to be in this space didn’t really know what to make of ‘The Voice,’ where it sat with the other competition shows, thought they knew, didn’t want to sit in the cattle call, but what happened was the level of talent in Season 1 was so high… when [we] went in early for Season 2…. working musicians … maybe [people] signed to a small label, people who really want to make it, who never would have stood in line for any other show came out,” he said. “Whatever you thought of Season 1, this [new talent crop] is way, way, way higher.”

“The Voice” premieres February 5, after the Super Bowl on NBC.

And when it does, the four celebrity coaches — Christina, Blake Shelton, Adam Levine and Cee Lo Green — will have eight new superstar friends helping them out. Click here to find out which singers will join the show as guest mentors!