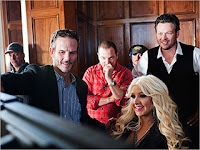 You probably guessed NBC would promote The Voice during its Super Bowl coverage, but not like this: The network is going big with a special The Voice Super Bowl ad from Friday Night Lights and Battleship director Peter Berg.

The 60-second ad is titled “Vokal Kombat” and plays off an element of The Voice that’s unique to the NBC singing competition: The judges’ swivel chairs that turn to face a contestant during the auditions when a judge hears a performer they believe is deserving of a spot on the show.

Of course, if more than one judge turns around to face the stage, they must compete against each other as they try to win over the contestant to their team. The ad takes this rivalry to new heights, with Christina Aguilera, Blake Shelton, Adam Levine, and Cee Lo Green employing martial arts, weapons, and dirty tricks to win the battle royale.

The ad will make its debut during NBC’s presentation of the big game on Feb. 5, which is followed by the second season premiere of The Voice. A 30-second commercial in the Super Bowl costs an advertiser around $3 million, but NBC can air The Voice spot as a promo. 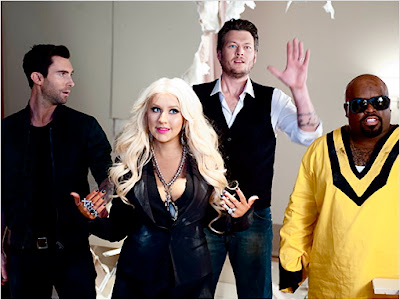