[NEWS] HOLLYWOODLIFE IS PROUD THAT XTINA IS PROUD OF HER FIGURE AND REFUSES TO COVER UP! 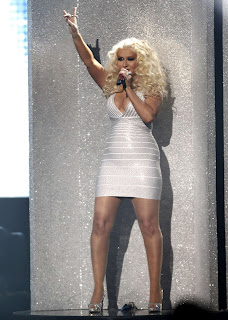 Yes, there were gasps when Christina Aguilera appeared on the AMA’s stage last night, November 20th, considerably more curvy than she has ever been. So what?

The singer and The Voice judge looked bodacious and bootylicious in a white, short and skin tight Herve Leger bandage dress.

She had definitely gained some weight but she belted out her hit with Maroon 5′s Adam Levine, Moves Like Jagger, and hit all her notes.

It was a stellar performance and twitter lit up, but sadly and not all that surprisingly I guess — the comments were almost entirely about her weight gain.

Now a source who’s a close friend of Christina’s tells Radaronline that “Christina loves her curves,” and wonders — “since when is it not ok to have curves?”

She is apparently happy in her skin and feels “it’s not what you look like in a dress, it is how you feel and it is about owning your dress.” If you want to wear a tight dress, then own it,” her friend says.

Great point Christina. You looked comfortable. You looked sexy and you performed with confidence. Your silver hosiery and shoes were perfect with your minidress, so who cares what the twitterverse says.

A production assistant at the recent American Music Awards admits to HollywoodLife.com, that “most of us were shocked when we saw how much weight Christina had gained but she didn’t act embarrassed or ashamed. She held her head high and seemed like her usual confident self. Her confidence is what makes her sexy regardless of her weight!” Totally agree!

Furthermore, Christina “feels like she is setting an example for women and young girls, especially Latinas”, according to her friend. ” She’s very proud of her curves. Christina thinks she is a good role model — not everyone is super skinny and she wants girls to embrace their body type.”

Furthermore, Christina’s boyfriend, Matthew Rutter, loves her exactly the way she is. Hollywoodlife.com observed Matthew hugging Christina, rubbing her back and indulging in more PDA both in front and away from the cameras at the Skyrim launch event on Tuesday, November 8th at the Belasco Theater, in LA.

So Xtina haters — get lost, worry about your own weight and just try to sing any notes, anything like Christina!
– Bonnie Fuller

Source: HollywoodLife
Posted by AGUILERA ONLINE™ at 6:10 AM