[PHOTO] CHRISTINA AGUILERA IN THE STOCKS AT THE 'LONDON DUNGEON' 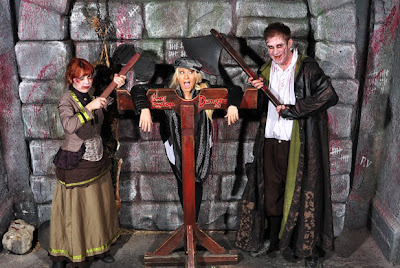 Christina Aguilera found herself in the stocks as she visited the London Dungeon.

The singer took a break from her schedule to visit the attraction, getting into the Halloween spirit a few weeks early.

Aguilera, who was among the performers at the Michael Jackson Forever tribute concert in Cardiff over the weekend, was snapped alongside two of the grisly attraction's sinister characters.

Appearing at the Jackson event on Saturday, Aguilera wowed the crowds with versions of 'Smile' and 'Dirty Diana', which she performed alongside topless male dancers.

The Voice judge is currently working on a new album, the follow-up to 2010's Bionic.

Source: Digitalspy
Posted by AGUILERA ONLINE™ at 7:10 AM