[NEWS] CHRISTINA AGUILERA OPEN TO SINGING AT THE SUPER BOWL 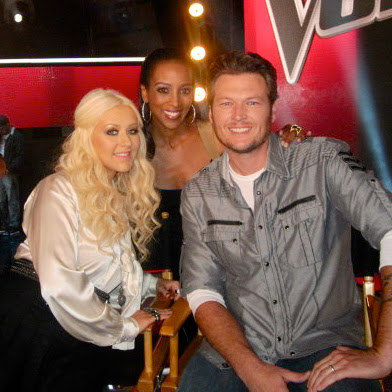 Christina Aguilera is set to follow the Super Bowl this year with the Season 2 premiere of her show, “The Voice,” but she told Access Hollywood she’d be open to singing at the big game too.

“Damn right,” Christina’s fellow “Voice” judge Blake Shelton chimed in, referring to himself. “You’re damn right I will… I’ll sing one of Christina’s song at the Super Bowl.

AH Nation Poll: Should Christina Aguilera give the National Anthem another try at the Super Bowl? Click HERE to vote!

Christina, Blake, Adam Levine and Cee Lo Green are all back as coaches for Season 2 of NBC’s reality singing competition, “The Voice,” and the superstar singer said coming back for another round was an easy sell.

“I had to come back and do a second [season]. How could I not?” she asked. “This is the most exciting show – ever! The suspense value? It’s intense… I think I get more nervous in these blind auditions than the actual artists and vocalists that come up here to audition. It’s nerve wracking and exciting.”

The early phases of “The Voice” auditions are currently going on in Los Angeles and Christina said the talent that has come through has been of a different caliber.

“It’s amazing to realize the fact that the bar has been raised so high this year and we’ve actually become more critical because of it… There’s not one singer that isn’t good or great that comes through here,” she said. “So we’re extra critical and we’re all looking for something so unique and so different.”

Christina had a host of powerfully voiced women on her squad in Season 1, and this time around she’s got a more diverse roster, so far.

“I have everyone from an opera singer to an MC,” she said. “It’s amazing and then, of course, I have my powerhouse, crazy, soulful vocalists that blow you away. It’s an exciting year for diversity.”

Season 2 of “The Voice” premieres on February 5 on NBC, after the Super Bowl.