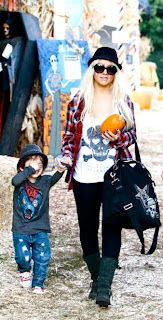 Back in 2009, the Internet decided former reality show darling Jessica Simpson would be its target. Spotting an unflattering photo of the singer wearing a pair of ill-fitting jeans, Internet surfers and blogs unleashed upon Simpson, deriding her for supposedly daring to gain a smidge of weight. And though the singer still struggles with the taunts — and even used them as inspiration for her short-lived Vh1 series examining appearance, The Price of Beauty — our impatient, tabloid-hungry nation has shifted its focus. Now, the Internet is spending its time slamming pop star and The Voice mentor Christina Aguilera.

The body inspection of Aguilera is nothing new — in the early 2000s, chatter spread about a possible breast enhancement surgery. But now, eyes have moved to her thighs, with bloggers calling her every synonym for “fat,” even slapping her with nicknames comparing her to Jersey Shore‘s Snooki. (Who, by the way, looks perfectly fine too, despite some unwise clothing choices.) But the labels don’t stop on the Web. On Friday’s Fashion Police, Kelly Osbourne unloaded on the singer after some harsh photos from the Michael Jackson Tribute Concert began making the rounds. Said Osbourne, “She called me fat for years. I was never that fat.” (Osbourne also criticized Aguilera’s body last month, calling her a “fat b—h.”)

Clearly, since Osbourne and Aguilera have a complicated past, it’s easy to chalk this smack-talk up to a petty grudge. But this isolated name-calling incident is still troubling when you consider we’re still fighting to end all criticisms of the female form in Hollywood and our everyday lives. It’s a fight that’s obviously become much more difficult with the advent of the Internet — when an outlet makes it so simple to anonymously chide celebrities for looking less-than-perfect, how can we stop the overriding sentiment that fat equals hideous? It was hard enough to combat those perceptions coming from commenters, but now that celebrities themselves are piling on the criticisms, how can we win?

I’m not saying that celebrities should be role models. In fact, I hope the Internet has allowed young adults to learn as much about Ida B. Wells and Eleanor Roosevelt as the latest Twilight movie. But it’s impossible to argue that people of all ages aren’t swayed by Hollywood’s opinions. Hollywood tells us who to accept as the latest A-lister, what film to brag to friends that you’ve seen, and, yes, how to look. And when a reality star like Osbourne — who, whether you like it or not, is considered a celebrity — lambasts a singer’s appearance just years after her own struggle with weight, it’s immediately more difficult to convince others that a) that sort of behavior is unacceptable, and b) that there is positively nothing wrong with being bigger than a size 2.

Even I have found myself affected by it. When I was a child, there was no Internet to point out all my possible faults. Now, it only takes five minutes surfing to web to learn that your nose isn’t straight enough, your forehead is too large, or your hips are just not quite proportional to your waist. And when I see TV commentators like Osbourne criticize a beautiful woman like Aguilera, how could I not look in the mirror and think, Gee, if SHE’s not pretty enough, then I must be hideous. We’ve become all too aware in the past year of the dangers of bullying. If elevating that bullying to a public, glitzy platform can turn this well-adjusted adult into someone who suffers from body dysmorphia, then how can we expect younger generations to be confident in their appearance?

I’m aware that comedians (even Fashion Police‘s own Joan Rivers) have made careers teasing celebrities about their weight. But as much as jokes might bruise, it’s easier to ignore cheap shots delivered by people who would insult an orphaned kitten. When someone like Osbourne delivers a comment meant only to injure one’s ego — all, I have to say is, kids, please don’t try this at home. Oh, and Christina, follow your own advice: