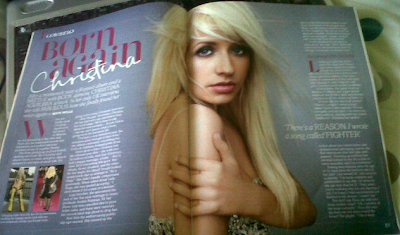 When we finally meet Christina Aguilera in her hotel in Munich, we are greeted by the diva doll. There are the trademark blonde hair extensions and the perfect red pout, perched on top of a Gothic throne far from getting up (God forbid) or shaking our hand, the Christina doesn’t move or smile and gives clipped answers and doesn't attempt to small talk. It’s going to be a long 10-minute interview!

Over the past 18 months, Christina, 30, has had more ups and downs than her vocal range. We’re here to talk about her new perfume, “Secret Potion” but we can’t ignore her personal life.

“I’ve had a very turbulent year like everyone goes through in their lives” She admits cautiously, smoothing her leopard print Dolce & Gabbana dress.

Once upon a time, Christina was the ultimate pop diva, she sold over 30 million records, won 5 Grammy's, had a happy marriage, a baby… but in June 2010 everything fell apart. Her album “Bionic” bombed and the video for her single “Not Myself Tonight” looked suspiciously like an attempt to do a "gaga." She didn’t handle the comparisons graciously, when asked about lady gaga she was quoted as saying “I don’t know if it’s a man or woman."

Last October she announced her 5 year marriage to record producer, Jordan Bratman, was at an end, her Bionic tour was cancelled due to poor ticket sales & there were rumors her record label were about to drop her. Then the embarrassing slip ups started, she messed up the lyrics to the National Anthem (kind of the biggest deal there is in the states), tripped on stage at the Grammy's & got arrested on suspicion of public intoxication (charges were later dropped). Gossip columns had a field day, how did that feel?

“In this business it’s all about a juicy story,” she says, “but I think you learn that it’s not worth time or energy, I’m immune to all that now.”

Luckily just after her arrest, came “The Voice”, an X Factor style show where the judges (Christina, Cee Lo Green, Maroon 5’s Adam Levine, and country music star Blake Shelton) have their backs to the contestants so they only judge their voice. It was a huge hit and gave Christina some much needed credibility.

In September Christina’s vocals on Maroon 5’s 'Moves Like Jagger' kicked Adele of the top spot in the US and remains near the top of the charts here too.

So how did she turn it all around?

“There’s a reason why I wrote the song Fighter” she explains, “It’s my mentality and my spirit. I’ve over come every setback, starting with my chaotic childhood.”

She has spoken before about her violent father & dysfunctional up bringing and for the first time in our chat she speaks with passion.

“Growing up instilled that survival instinct in me. It’s a sink or swim mentality and I’m a swimmer.”

Having being famous since the age of 13, how does she feel now she’s in her 30’s?

“Just turned 30,” she corrects us sternly. "I’m more confident in my own skin. I’d rather be my age now, than be 21. That’s when you’re realizing who you are, figuring it all out. I’m happy I was experimental and fearless in my choices. I wasn’t shy."

You don’t say. Does she still have those leather chaps?

“Oh I archive all my stage costumes.”

Does she ever dig them out and dance around the house?

Having every shape size and color over the years, is Christina happy with her look now?

“There are layers I feel weaker and more insecure," she admits. “It’s about getting to the root of the reason you feel that way, whether it’s people around you, how to live your life or how you eat. I Try To Work Out 5 times a week, as I find it hard to motivate myself. I don’t believe in dieting but i do love comfort food.”

Any Down Time Is Spent With Her Son.

“I’ll lie in bed with my little Boy (Max) and watch a Disney movie.”

We’re given a clue to wrap things up, and spot a handsome scruffy looking guy. It’s Matt Rutler, Christina’s boyfriend. They met on the set of her movie Burlesque and it seems he hasn’t left her side since.

So what’s up next?

“I’m excited to put those feelings and emotions from the past year into a new record. Songwriting is therapeutic for me."

Is there a song that makes her cry?

“Um…,” she looks down, her eye’s widen as she remembers something & laughs softly. “Beethoven’s Moonlight Sonata. Especially after a few cocktails."