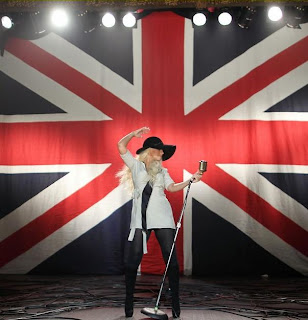 It may not officially be fall until September 23rd, but by our count, summer is over. It was a time of crappy blockbuster sequels, massive U2 stadium concerts, Michele Bachmann's rise (and fall) as a serious presidential candidate, and earthquakes and hurricanes that seemed to foretell a coming apocalypse. Somehow we survived it all and now can look back with instant nostalgia.

10. Maroon 5 featuring Christina Aguilera, 'Moves Like Jagger'
NBC's The Voice seemed like another American Idol knock-off doomed to the same reality show dustbin where Chains of Love and Love Cruise now reside. Surprisingly enough, the show found a huge audience –and managed to reinvigorate the careers of judges Adam Levine and Christine Aguilera. They teamed up on this dance song that became a much-needed radio hit for both artists. It also joins the list of recent pop songs to reference Mick Jagger – including Ke$ha's "Tik Tok" and Kanye West's "Swagga Like Us."

9. Adele, 'Rolling In The Deep'
The biggest album of the year was supposed to be Lady Gaga's Born This Way. Then Adele came out of nowhere with her second album 21 and crushed everything in its path. The LP was propelled by the single "Rolling In The Deep," which has been inescapable all year. It's been on Gossip Girl, Glee and pretty much every other show on television. "I love seeing Lady Gaga's boobs and bum,"Adele told Rolling Stone in April. "I love seeing Katy Perry's boobs and bum. Love it. But that's not what my music is about. I don't make music for eyes. I make music for ears."

8. Good Charlotte, '1979'
No, Good Charlotte didn't release a cover of the Smashing Pumpkins' "1979" this summer. This is an original song that looks back nostalgically on a simpler time. "The Clash was on the radio," Joel Madden sings. "And Mom and Dad were still in love in 1979. It was a good good year." He also references "Heart of Glass," "Rock & Roll High School" and "Dream Police." Madden was born in March of 1979, so the dude must have a pretty good memory.

7. Lady Gaga, 'Edge of Glory'
Lady Gaga wrote this song about her grandfather dying, but after recruiting Clarence Clemons to play sax on the song it's become an unlikely tribute to the the Big Man. He played the track with her on the finale of American Idol and shot a video for it shortly before he died. "She's the real deal," Clemons told Rolling Stone in February. "All the craziness and stuff, there's a purpose to all of it. She has no boundaries . . . It's a day I'll never forget. I always wait for Bruce to call and say 'come do this' and it's real exciting for me. I never saw this happening, though."

6. Red Hot Chili Peppers, 'The Adventures of Raindance Maggie'
The Red Hot Chili Peppers had a lot to prove when they released the first single from I'm With You. It was the public's first look at new guitarist Josh Klinghoffer, who has the incredibly difficult task of replacing the mighty John Frusciante. The debut single "The Adventures of Raindance Maggie" charted all over the world, and hit Number One on the American Rock Songs chart – proving the band does have life after Frusciante. For the video, they took a page out of the Beatles and U2 playbook by playing on a rooftop. Unlike those previous two rooftop shoots, nobody tried to shut them down.

5. Panic! at the Disco, 'Ready to Go (Get Out of My Mind)'
Panic! at the Disco have had a rough past few years. Their 2008 LP Pretty. Odd was a drastic change from their emo roots, and they even dropped the exclamation mark from their name. Fans were pissed, and they just got angrier when half the band left the group in the summer of 2009. On their newest album they brought back the exclamation mark and their old sound. What remains of their fanbase is very pleased.

4. Coldplay, 'Every Teardrop Is A Waterfall'
Coldplay are one of the last rock bands that can reliably release a big hit single in advance of every new album. Hell, even U2 can't pull that off anymore. Coldplay say that their upcoming Mylo Xyloto is inspired by 1980s American graffiti, and the video for "Every Teardrop Is A Waterfall" certainly plays into that theme. It remains to be seen whether Coldplay can keep up this momentum with their next few singles from the LP.

3. Foo Fighters, 'Walk'
During Nirvana's heyday few people predicted that the drummer would pull a Phil Collins and become a superstar outside of the band, but that's exactly what he's done. The Foo Fighters just seem to get more and more popular. As big as they are here in America, they're even bigger in Europe. It's truly remarkable. Their new album Wasting Light was cut in Dave Grohl's garage with Nevermind producer Butch Vig. The single "Walk" was inspired by Dave Grohl's attempts to teach his daughter to walk.

1. Britney Spears, 'I Wanna Go'
This wasn't even close. Britney won by a landslide, which shouldn't come as any surprise. The woman works with the most successful pop songwriters in the industry. This track was co-written by Swedish songwriting legend Max Martin – the man behind everything from "Since U Been Gone" to "I Want It That Way" to Britney's first hit "...Baby One More Time." He's a 40-year-old Swedish guy, but he knows exactly what American teenage girls want to blast in their cars. The video for "I Wanna Go" starts with Britney giving a press conference, which is hysterical because she's one of the least media-accessible singers in the world. It's easier to get a sit-down with Bob Dylan than it is with Britney.