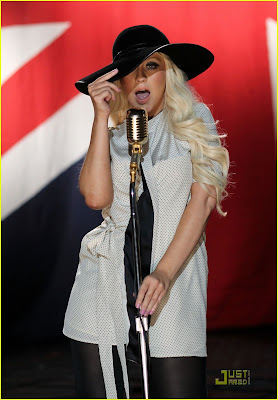 “Moves Like Jagger” should not logically exist. Radio granted Hands All Over‘s lead single “Misery” little company, making Maroon 5′s career trajectory resemble even more the downward half of a roller coaster, a few consolation bumps the only highlight until the end of the ride. Christina Aguilera, meanwhile, was lucky to have a career trajectory after her Bionic bomb and subsequent tabloid oops. Half a year ago, a collaboration between the two would have seemed less like an event, let alone a potential No. 1 track, and more like two shipwrecked people clinging to one another in a desperate attempt to stave off the inevitable.

Then came The Voice, NBC’s search for a star singer that so far has been more helpful to its search party. Coaches Cee Lo Green and Blake Shelton were on the rise before the show and didn’t much need the boost. Adam Levine and Christina Aguilera did, and fortunately for them, becoming the show’s breakout stars provided an opening to plausibly crack the charts again. Their song’s got as much swagger as any given song this decade despite “swagger” never appearing in the lyrics, Maroon 5 are much better when they’re trying disco and not funk, and Christina can still sing, but none of those alone or combined took “Moves Like Jagger” past former No. 1 Last Friday Night (T.G.I.F.),” now with a hangover of about 18 chart spots. Nor did the prospect of a coach pairing alone; Cee Lo and Xtina’s “Nasty, recorded pre-Voice anyway, didn’t have nearly the same push. Adam and Christina’s personalities bolstered the show, and they bolster the otherwise lightweight “Moves Like Jagger.” People want to hear them fight and flirt.

The first thing to know about “Moves,” written by Levine with assists by Benjamin Levin, Ammar Malik and Shellback, is easy enough to guess: Adam has the moves like Jagger, and Christina crumples at the sight. The second thing to know is that “Moves Like Jagger” is a spiritual sequel to “Give a Little More,” the “Misery” follow-up and near-hit. Both got their frisson, if you think they’ve got frisson, by staging miniature battles of the genders. Both sound less like relationships than hostage situations, all about negotiating control and who’s doing the one-sided seducing at any given point.But “Moves” adds another layer, one that exploits the slightly sleazy sexual tension between the two that The Voice hinted at roughly twice an episode. It only takes one viewing of The Voice, one recap or just one glance at the press photos to sense the “hate-flirting” as one commenter put it. They’re both playing it up, Adam increasingly shirtless to tease the two-thirds of the world attracted to him (sample Google results: “Can I have a heterosexual man-crush on Adam Levine?” and “My Mother TOTALLY Has a Crush on Adam Levine”) and Christina, it seems, not acting herself tonight or for the rest of the decade. On “Moves Like Jagger,” they play it all the way up the charts.


You wanted control, so we waited
I put on a show, now I make it
You say I’m a kid, my ego is big
I don’t give a shit
And it goes like this

The first stanza of “Moves Like Jagger” is a throwaway, full of already-trashed lines like “just shoot for the stars” and “aim for my heart.” It’s semi-romantic BS to pass the time before the synth bass groans in; it’s small talk. The lyrics get going when the song does. “Christina” wanted control, so they held off on anything romantic until “Adam”‘s moves made that impossible. (Every listener will tell you about mishearing “now I make it” as “now we’re naked.” This is deliberate.) “You say I’m a kid,” Adam sings, and it doesn’t matter that he’s a year older than Christina or that the two singers have no romantic connection. Duets tend to have this subtext built into the form by default; plug these two in, and it’s barely subtext.

These lyrics look much different on paper than in song. Credit Adam Levine’s voice, loose with autotune and doing Jagger-like dances around every note. He makes come-ons like “kiss me ’til you’re drunk” seem less creepy and pickup lines like “take me by the tongue” seem like they might work. He even sells, almost, the Mick Jagger comparison–impressive, because although songs about celebrities and rockers are numerous, extended comparisons to rock stars aren’t. Jagger’s real moves weren’t dances so much as, as critic Frank Kogan put it, more like a “cold deadly stalk.” And taken literally, the chorus of “Moves Like Jagger” must be talking about mind control, as if Jagger’s moves were also hypnotist’s pendulums. Adam Levine will literally own you. His kiss will literally intoxicate you, as if his saliva is tequila. His eyes are made of spirals. All this is ridiculous, even more so when considering the decades-forged charisma gap between Levine and Jagger. But the same suspension of disbelief that made “Moves Like Jagger” a smash hit makes it seem at least kind of believable.


Oh, so get in the car
We can ride it wherever you want
Get inside it
And you want to steer
But I’m shifting gears
I’ll take it from here

The second verse makes things darker; she’s “broken and scarred” to where nothing feels right, which invites biographical criticism but doesn’t beg it. He makes her think he’s got the solution. Levine could’ve ended things on “when you’re with me, I make you believe,” which sounds nice enough, until he finishes it with “I make you believe that I’ve got the key,” deceptive and a fake-out. Then there’s a metaphorical car, which she can steer and drive until she can’t, and Adam’s got the steering wheel and the gear stick and, by the way, the moves like Jagger again.


You want to know how to make me smile
Take control, own me just for the night
But if I share my secret
You gonna have to keep it
Nobody else can see this

Christina’s contribution to “Moves Like Jagger” consists of two interchangeable verses. Her “secret,” such as it is, is that she does in fact like the moves like Jagger. This isn’t really a secret. Neither is the fact that Christina’s own moves and melisma are toned down exponentially, or that she’s directly referencing her own “Genie in a Bottle“–almost the same song with no Adam–with the “rub me right” line. The real secret is whatever unexplained Jagger move kept Christina Aguilera from completely taking over the song. Most critics, when talking about “Moves Like Jagger,” talk about how Christina’s barely on it. Compare “Lady Marmalade,” where Mya, Pink and L’il Kim–charismatic performers all–might as well be laying down rafters for Christina to soar above. After this, she disappears except to barely echo Adam’s lines or toss a few notes into the song here and there. It’s practically a conquest, a duet less about singing together and more about fighting to see who’s sung into submission first.

Again, none of this sounds menacing; it’s played for fun and diversion, and it only lasts as long as “Moves Like Jagger”‘s three or so minutes. Adam, headlines indicate, seems like an OK guy, free of the Casanova scandals that this song would suggest, and Christina–probably noticing how her more subdued Sia collaborations were the ones critics and fans didn’t insult–has hunkered back from her coach-to-coach lasciviousness. It helps that The Voice isn’t airing until spring, keeping the two from their Simon/Paula schtick for now. “Moves Like Jagger” is the next best thing: a small song’s worth of tension, a referendum on Adam and Christina’s careers and a lengthy ad for The Voice that gave them continued life. It’s not enough for a career revival, but it couldn’t succeed if people didn’t care.