[NEWS] 'MOVES LIKE JAGGER' REMIX BY MAC MILLER WILL BE RELEASED TO ITUNES & RADIO OCT. 4TH Maroon 5’s smash hit “Moves Like Jagger” has climbed to the #1 spot on the Top 40 and Hot AC charts and has also reclaimed the #1 spot on the Billboard Hot 100 chart. The song has already hit many chart milestones, having debuted at #1 on the iTunes Top Songs chart and reaching #1 on the Hot 100 previously this month. With the single’s success on the Hot 100 chart, Maroon 5 frontman Adam Levine has become the first artist in its 53-year history to reach #1 as part of a group and to enter the Top 10 at the same time as a soloist, as he is featured on Gym Class Heroes’ “Stereo Heart”. Additionally a “Moves Like Jagger” remix, featuring rapper Mac Miller, will be available on October 4th on iTunes and radio. Maroon 5 is also set to perform on The Ellen Degeneres Show on September 21st. 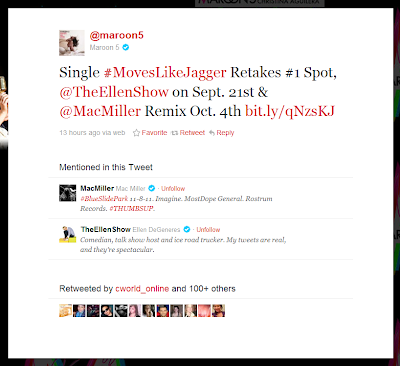