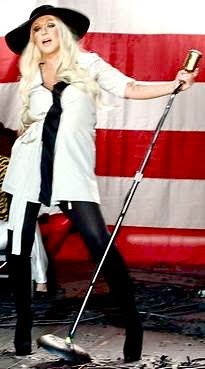 Back in July, on the set of the "Moves Like Jagger" video, Maroon 5 frontman Adam Levine made a compelling argument for the song to be crowned the Song of Summer, stating, rather matter-of-factly, "There's not even any other songs being released this summer."

Turns out he was wrong. Not only were there other songs released during summer 2011 (we checked), but, as it turns out, "Jagger" may end up being the Song of Fall too.

For the fourth week, the song — which also features Christina Aguilera — sits atop the Billboard Hot 100, beating the likes of Adele, Lady Gaga and Eminem. And it shows no signs of vacating the #1 spot anytime soon. Maroon 5 even released a rap remix with up-and-coming MC Mac Miller online earlier today. And while the success of "Jagger" is certainly impressive, it's equally amazing to learn that it's the first chart-topper for Aguilera in 10 years (her last being 2001's "Lady Marmalade").

So understandably, Aguilera is thrilled. Then again, as she told MTV News in a statement Thursday (September 29), she knew "Jagger" was destined for greatness from the moment it was first played for her.

Aguilera shows up in the Jonas Åkerlund-directed "Jagger" video, and she'll return to judging duties on the second season of "The Voice" too. Buoyed by the success of her team-up with Maroon 5, she's already at work on a new album — the follow-up to 2010's Bionic — reportedly due next summer.

Source: MTV
Posted by AGUILERA ONLINE™ at 8:42 AM