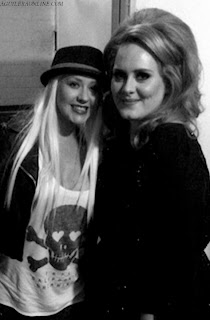 Following an acclaimed performance of the song on the MTV Video Music Awards Aug. 28, Adele's stark ballad "Someone Like You" bounds to the top of the Billboard Hot 100, vaulting 19-1 with dual Digital and Airplay Gainer honors.

The honors continue to pour in for Adele, as "Like" is her second Hot 100 No. 1, after "Rolling in the Deep" spent seven weeks at the summit beginning in May.

"Deep," which won Adele three trophies at the VMAs, and "Like" appear on the singer/songwriter's sophomore album "21," which, with 3.3 million copies sold in the U.S. since its February release, ranks as 2011's top-selling set.

All we needed was one week! :D #justsayin