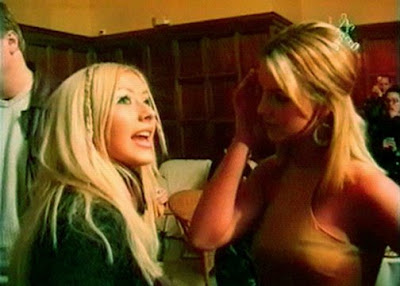 The entire production will run 8 minutes, and will open the show. The introductory video will be eerie, and will feature a home video of a six year old Britney Spears playing with Barbies. This will lead into Selena Gomez singing “…Baby” in a signature school girl outfit. Followed by Miley Cyrus, whispering “…I know I may be young…” with a snake draped around her neck. Then, Demi Lovato enters rises from the center of the stage with a sequined costume on. As Demi’s song ends, all girls strut to left stage, put on Mickey Mouse ears and sing “3″ in a manner that will surely have people talking the next day. (Hint..Hint…think 2003) As their shocking performance ends, lights fade up on Katy Perry who is soon joined by Rihanna in singing “Hold It Against Me”. As their song ends, Nicki Minaj comes from the back of the audience wearing a ringleader outfit and singing her “World Ends” verse. As she finishes, all eyes shift to Britney who performs her song with Sabi. (Details of this will be available later)

Before Video of the Year is presented, there will be a video montage of Britney videos with excerpts of stars thanking Britney for her contributions to music including: Miley Cyrus (confirmed), Lady Gaga (confirmed), Justin Timberlake (unconfirmed), Selena Gomez (confirmed), Joe Jonas (confirmed), Will.I.Am (unconfirmed), and Christina Aguilera (unconfirmed). As the video ends, Madonna enters the stage, makes a brief statement and presents Britney the Lifetime Achievement Award.”

I won't be holding my breath on this one...